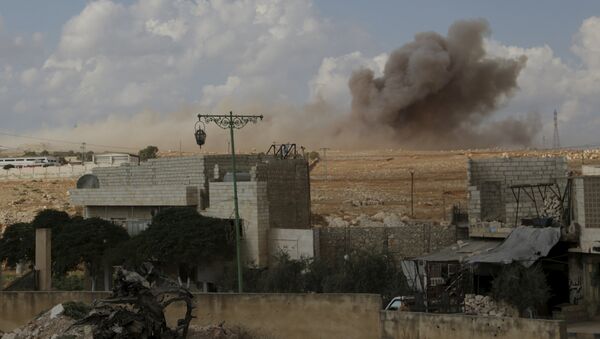 The United States and its allied militant groups in Syria are consolidating forces, as toppling President Bashar Assad continues to remain Washington’s principal goal in the conflict, including the recent al-Nusra Front offensive in Idlib, which was repelled by the Russian military, experts told Sputnik.

The recent advances by the Syrian Army and its allies, in particular in Deir ez-Zor, have become a serious concern for the Pentagon and triggered counteractions by terrorist groups, according to Araik Stepanyan, executive secretary of the Academy for Geopolitical Problems.

"Our so-called American partners are nervous. There is almost no secret that Washington controls both Daesh and al-Nusra Front. Moreover, the US provides arms to the so-called moderate opposition in Syria. As a result, such weird things are happening. They are authorized by the Americans," Stepanyan told Radio Sputnik, referring to the incident that took place earlier this week in the de-escalation zone in Idlib.

WATCH Russian Airstrikes Destroy Nusra Front Attacking Military Police in Idlib
The Russian General Staff said that the attack was "initiated by US secret services to stop the successful advance of government troops to the east of Deir ez-Zor." Washington, however, has denied the allegations.

Commenting on the statement, Russian political analyst Mikhail Smolin said that the Russian military is trustworthy in this situation.

"In fact, Russia and the US don’t have common goals in Syria. The mission of the Americans and their allies is not over yet. Their plan is to oust [Syrian President Bashar] Assad. The goal of the US military is to consolidate anti-Assad forces," Smolin said in an interview with Radio Sputnik.

Elaborating further, the expert pointed to the fact that the tactic used by the Pentagon and its allied groups resembles "guerilla warfare" because the attack was directed against a separate military police unit.

"They [the Americans] have done that before. Apparently, their goal is to increase the number of such incidents. Possibly, they want to make the situation look like the Russian units in Syria are not capable enough of countering serious attacks. However, this time the plan didn’t work out," Smolin said.