Finland 'Picks Up a Bug', Accepts Insects as Food Products 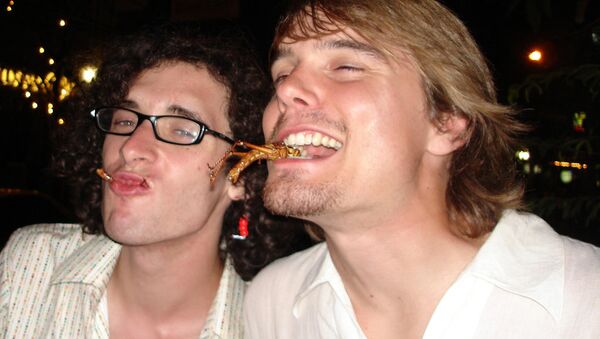 CC BY 2.0 / Adam Kahtava / Eating bugs
Subscribe
Previously seen mostly as pests, insects are on their way to Scandinavian plates, as the Finnish Agriculture Ministry has given the green light to the cultivation and sale of bugs as food. This is seen as an economically viable and healthy diet option that is also likely to alleviate the industrial impact.

Despite a growing interest in using creepy-crawlies as sustainable and protein-rich food products among consumers and companies alike, insects as food have been banned in Finland until now.

Edible insects have been sold in Finland before, but were marketed otherwise, such as, for instance, "kitchen decorations." On Wednesday, however, Finland's Ministry of Agriculture and Forestry formalized the use of insects as food, which opens the door for cultivation and sale according to standard food safety laws — to the joy of health aficionados, environmental activists and nutrition companies.

Danish Hotels 'Bugging' Clientele With Sustainable Insect Breakfasts
Previously, the Ministry argued that the EU guidelines allowed room for interpretation, yet decided to go with the flow and promote the consumption of bugs as a healthy and ecological complement to one's diet, Finnish national broadcaster Yle reported.

"The cultivation and sale of insects as food products demands that we ensure the final products are safe for consumers. Evira will provide instructions for producers and regulators, and we will also immediately get started with setting up rules for the business together with the industry's entrepreneurs," Evira food safety division director Leena Räsänen said, as quoted by Yle.

While the practice of consuming insects as a specialty is relatively new to Europe, Finns seem to be more interested in it compared to fellow Europeans.

Last year's survey by Turku University and the Natural Resources Institute (LUKE) found that half of the respondents were interested in buying insect-based foods if available. This compares favorably to less than 40 percent of Swedes, 30 percent of Czechs and just 25 percent of Germans who were eager to do the same. Remarkably, one third of Finnish respondents said they have already tried eating bugs in some form or another.

Insects are edible in a variety of dishes, yet many may find the idea rather unappetizing when presented in an intact form. Therefore, researcher Terhi Pohjanheimo argued that the powdered form provides the most advantages for consumers and manufacturers alike. Consequently, he listed meatballs, nuggets and pizza fillings as possible alternatives, alongside snacks and other prepared meals.

Living on Locusts and Wild Honey: Swedes to Enjoy a Diet of Insects and Algae
Many food companies interviewed as part of the project "Insects in the food chain" by the Finnish tech funding agency Tekes, admitted to considering insects as a protein-rich ingredient boosting nutrient value and minimizing ecological footprint. From food companies' perspective, insects are a lucrative option, as they require much less feed compared to cattle and are less costly to breed.

Insects are also seen as a more ecological option, compared with rearing traditional livestock, which accounts for 18 percent of greenhouse gas emissions. Insects also release much less ammonia and methane and require much less land and water.

Grasshopper garum: Grasshoppers, barley koji, larvae and salt to be blended with water, then left to ferment. pic.twitter.com/8Wea8lJNcM

​According to a 2013 report from the UN Food and Agriculture Organization (FAO), around two billion people worldwide consume insects as part of a traditional diet, a practice known as entomophagy. Beetles are the most commonly consumed insect, followed by caterpillars, bees, wasps, ants, grasshoppers, locusts, and crickets. All in all, more than 1,900 insect species are considered edible.