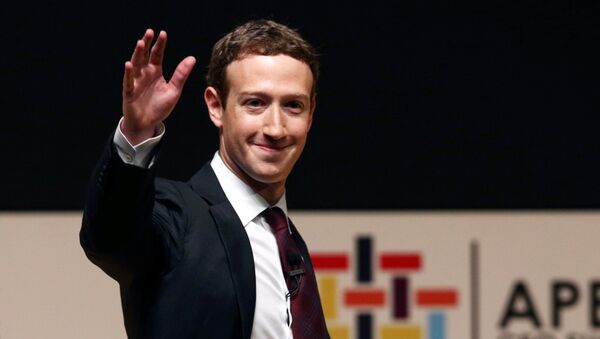 During a statement on Facebook live, Facebook CEO Mark Zuckerberg said that the suspicious ads the company had found in a months-long scouring of its system – ads representing a drop in the bucket in the 2016 election year – had been handed over to the US Congress.

"We are actively working with the US government on its ongoing investigations into Russian interference," Zuckerberg said. "We've been investigating this for many months now, and for a while, we had found no evidence of fake accounts linked to Russia running ads."

"When we recently uncovered this activity, we provided that information to the Special Counsel [Robert Mueller]. We also briefed Congress, and this morning, I directed our team to provide the ads we found to Congress as well."

"We will continue working with the government to understand the full extent of Russian interference," Zuckerberg concluded. "We will do our part not only to ensure the integrity of free and fair elections around the world, but also to give everyone a voice and to be a force for good in democracy everywhere."

In addition to finding scant evidence of Russian interference over Facebook in the US election of last year, Zuckerberg announced that they'd found no evidence of interference in the German election scheduled for this weekend.

Zuckerberg's comments were expounded on in a Facebook Newsroom post by Elliot Schrage, the company's vice president of policy and communications. Schrage wrote that while the company had found very little, the search for interfering ads is "a game of cat and mouse. Bad actors are always working to use more sophisticated methods to obfuscate their origins and cover their tracks. That in turn leads us to devise new methods and smarter tactics to catch them –  things like machine learning, data science and highly trained human investigators. And, of course, our internal inquiry continues."

The "activity" Zuckerberg mentions is 3,000 Facebook ads worth a total of $100,000 since 2015. In that same time period, over $30 billion was spent on all Facebook advertisements in the US according to online statistics compiler Statista. Between the two of them, US President Donald Trump and his prime rival in the 2016 presidential election, HIllary Clinton, spent $1.8 billion. The $100,000 of suspicious content represents less than 1 percent of 1 percent of either of those numbers.

After the 2016 election, Facebook tightened their restrictions on fake news and banned more than 200 outlets from advertising on Facebook. Not a single one of them originated from a Russian IP address.

In July 2017, an anonymous Facebook official told CNN "that we have seen no evidence that Russian actors bought ads on Facebook in connection with the election." Zuckerberg himself had previously called the notion of Russian interference on Facebook "pretty crazy" in the aftermath of the election.