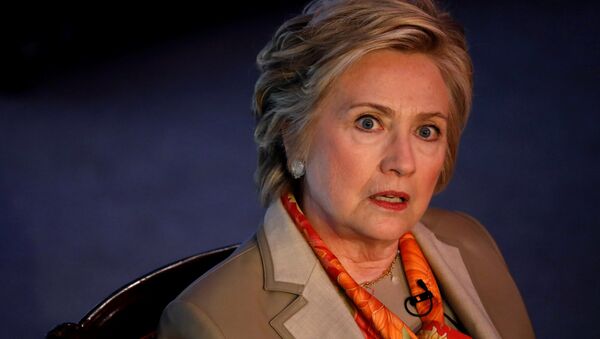 © REUTERS / Brendan McDermid
Subscribe
Judicial Watch is heading back to court on Friday to make their case that the National Archives and Records Administration must release alleged indictments that could’ve sent Bill and Hillary Clinton to prison for their roles in a fraudulent real estate scheme, according to a September 20 press release.

In 2015 the conservative watchdog filed a Freedom of Information Act request for 238 pages of documents written by Hickman Ewing, a deputy working under independent special counselor Kenneth Starr, who had been appointed to lead the probe into potential wrongdoing.

The Clintons never went to jail for their involvement in the Whitewater controversy, but their main business partner, James B. McDougal, was jailed and wound up dying in prison in 1998 at the age of 57. "The Clintons are really sort of like tornadoes moving through people’s lives. I’m just one of the people left in the wake of their passing by, but I have not whining or complaining to do, because I have lots of company," McDougal said in 1997.

According to Investopedia, "all three inquiries into the Whitewater land deal yielded insufficient evidence to charge the Clintons with criminal conduct" but "several of their associates were convicted as a result of the investigations."

“The National Archives argues that the documents should be kept secret, citing grand jury secrecy and Clinton’s personal privacy,” Judicial Watch said in the release. Since there have been so many more recent revelations surrounding the case, particularly a 2001 “Final Report of the Independent Counsel and a 206-page “Summary of Evidence Memorandum,” “there is no secrecy or privacy left to protect," Judicial Watch added.

"Mrs. Clinton’s grand jury testimony – and her alleged concealment of her role in this fraudulent transaction, including the hiding of her Rose Law Firm billing records concerning her legal work for Madison – reportedly became the subject of an obstruction of justice and perjury investigation," the conservative nonprofit said.

According to the group’s president, Tom Fitton, “tax dollars are wasted as the Deep State rolls along in its frantic efforts to protect Hillary Clinton … President [Donald] Trump should demand to know why his agencies are defending Hillary Clinton.”