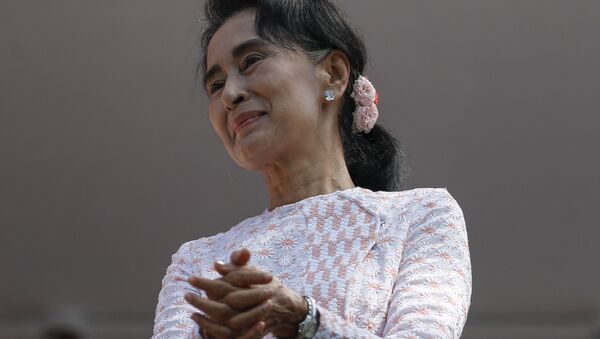 On Tuesday, Myanmar's state counselor and de facto leader, Aung San Suu Kyi, broke silence on the ongoing Rohingya crisis in a televised address. But the speech required reasonable fact-checking and was even described as a "a mix of untruths and victim blaming" by Amnesty International.

Suu Kyi called on the international community to assist the country's authorities in resolving the ongoing Rohingya Muslim minority crisis. She added that the government intends to carefully examine the situation and listen to all incoming arguments and counterarguments. Nevertheless, there were some dubious claims by the country’s leader that need to be scrutinized.

1. "We want to find out why this exodus is happening."

This claim directly contradicts the Final Report of the Advisory Commission on Rakhine State, chaired by former UN Secretary General Kofi Annan. The document was submitted to national authorities on August 23 and puts forward recommendations to end the crisis in Rakhine. In particular, the report details the reasons behind the ongoing Rohingya crisis, including the lack of citizenship for Rohingya Muslims and military and police actions in the region.

"Unless concerted action – led by the government and aided by all sectors of the government and society – is taken soon, we risk the return of another cycle of violence and radicalization, which will further deepen the chronic poverty that afflicts Rakhine State," Annan said in a statement.

Other rights groups, such as Amnesty International and Human Rights Watch, have also issued reports on the causes of the crisis, blaming the Myanmar government of "ethnic cleansings" against the Rohingya minority.

This point is disputed by rights groups as well as by those who have fled the violence in Rakhine. For example, Amnesty International reported September 14 that it had detected at least 80 massive fires in inhabited areas across northern Rakhine since August 25 when the crisis broke out. The organization also cited eyewitnesses who said that soldiers burned houses and then randomly shot fleeing people.

In turn, Human Rights Watch said that 62 villages were set ablaze between August 25 and September 14.

3. "More than 50 percent of the villages of Muslims are intact."

This claim is very hard to verify since there is no free access for journalists and international observers to Rakhine. Human Rights Watch reported, citing satellite images, that 214 villages have been almost completely destroyed. At the same time, the government said last week that 176 out of the 471 (37.4 percent) Rohingya villages targeted by the army were empty. Moreover, not all Muslims living in Rakhine are ethnically Rohingya.

4. "I'm aware of the fact that the world's attention is focused on the situation in Rakhine. As a responsible member of the community of nations Myanmar does not fear international scrutiny."

In fact, international organizations have repeatedly criticized Myanmar’s authorities for its reluctance to cooperate with aid groups and nongovernmental organizations (NGOs).

5. "It is not the intention of the Myanmar government to apportion blame or to abnegate responsibility. We condemn all human rights violations and unlawful violence."

In fact, the government and state-controlled media have repeatedly blamed the crisis on "extremist terrorists." At the same time, they have ignored reported human rights violations by the military and security forces.

6. "All people (in Rakhine State) have access to education and health care services."

In reality, most Rohingya people are denied citizenship and access to the majority of government services in Myanmar, according to the report by Annan’s commission.

Rohingya Crisis: 'British Gov't Has a Responsibility' Over Its 'Colonial Legacy'
It also added that Muslims are often prevented from accessing medical services across the region.

The recent operation by Myanmar’s military and security forces was launched following an attack by Muslim insurgents of Rohingya origin on security posts in Rakhine State in late August. The attacks prompted a harsh response from the authorities. Hundreds of people have died in the continued clashes, while thousands have been forced to flee.

The conflict originally started about a century ago. The latest upsurge has gradually escalated since 2011, hitting its peak in 2012 when thousands of Muslims sought asylum in special refugee camps on the country's territory or fled to Bangladesh. Another escalation took place in 2016. According to the UN, up to 412,000 people from Myanmar's Rakhine State have fled into Bangladesh since August 25.