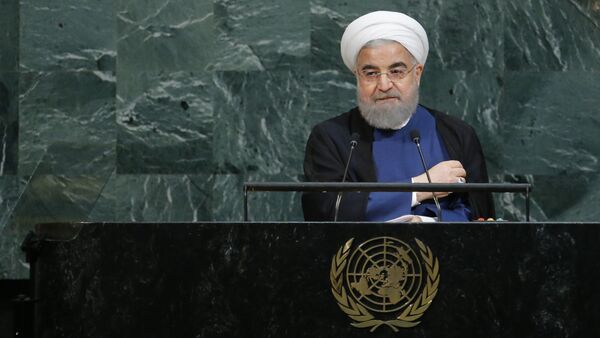 Addressing the 72nd UN General Assembly, Rouhani stated that the US administration was destroying its own credibility by trying to change the nuclear deal.

"By violating its international commitments, the new US administration only destroys its own credibility and undermines international confidence in negotiating with it or accepting its word or promise," Rouhani stated.

Iranian President Hassan Rouhani stated that Tehran was not deceived in the nuclear agreement and has not cheated or deceived anyone.

"We were not deceived, nor did we cheat or deceive anyone," Rouhani stated. "We have ourselves determined the extent of our nuclear program, we never sought to achieve deterrence through nuclear weapons."

Rouhani stated the Iran nuclear deal could become a new model for global interactions. He added that it would be 'pity' if the agreement is destroyed by 'rogue' newcomers of the global politics. According to the president, Iran will respond decisively and resolutely to a violation of the deal by any party.

"The JCPOA can become a new model for global interactions, interactions based on mutual constructive engagements between all of us," Rouhani stated.

"We will not be the first country to violate JCPOA, but we will respond decisively and resolutely to its violation by any party," Rouhani said.

#Iran missiles are only defensive to "keep peace and security in region", Rouhani tells #UNGA

When asked whether he has made a final decision on the Iran deal, Trump said, "I have decided."