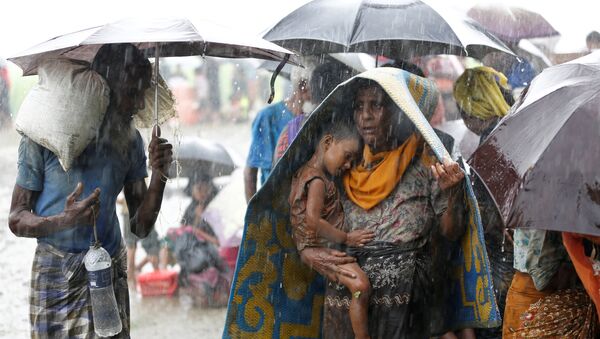 © REUTERS / Mohammad Ponir Hossain
Subscribe
As the Myanmar government continues its campaign against Rohingya, forcing thousands to flee the country, Facebook has reportedly banned posts of one of the minority’s groups, labeling it a "dangerous organization." The decision was directed against the Arakan Rohingya Salvation Army (ARSA) after an internal assessment.

The move came shortly before activists started accusing the social media giant of censoring posts about the military campaign against the Rohingya Muslim minority in Myanmar.

A Facebook spokesperson confirmed to the newspaper that the organization has been placed on company’s list of "dangerous organizations." According to The Guardian, the decision was welcomed by Myanmar leader Aung San Suu Kyi’s spokesperson, Zaw Htay.

ARSA was established in October 2016 on behalf of over 1.1 million Rohingya people living in the Myanmar state of Rakhine. The minority is regarded as undocumented migrants by the Myanmar government and is deprived of access to vital state services suchas healthcare and education.

Amnesty International Claims 'Evidence' of Ethnic Cleansings' of Rohingya
ARSA was labelled as a terrorist group by Myanmar authorities on August 25 after the group coordinated a string of attacks on security posts in Rakhine.

Meanwhile, there has been criticism from Rohingya refugees, journalists and activists that Facebook is censoring reports of human rights abuses against the Rohingya minority.

"I believe [Facebook] is trying to suppress freedom [of] expression and dissent by colluding with the perpetrators of genocide  in the Myanmar regime," activist and journalist Mohammad Anwar was quoted as saying by The Guardian.

The latest spike in violence in Myanmar was triggered in late August after Muslim insurgents of Rohingya origin attacked security posts in Rakhine state. The attacks prompted a harsh response from the authorities. Hundreds of people have died in the on-going clashes, while thousands have been forced to flee.

Myanmar is home to over 100 various ethnic groups, but Rohingya have been effectively denied citizenship since 1982, when the country’s Nationality Law was introduced. This is just the latest upsurge in a conflict going back a century. The current flare up escalated in 2011 and hit its peak in 2012 when thousands of Muslims sought asylum in special refugee camps on the country's territory or fled to Bangladesh. Another escalation in the feud took place in 2016.