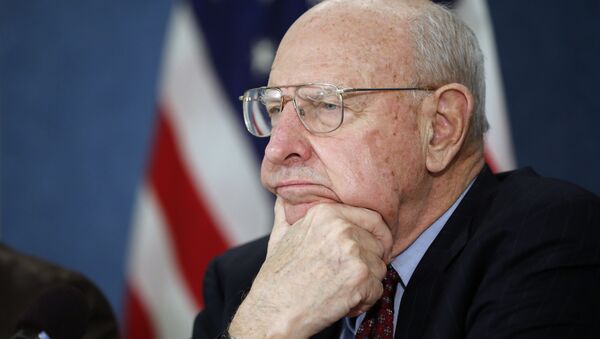 © AP Photo / Alex Brandon
Subscribe
According to Thomas Pickering, United States is involved in informal talks with representatives of North Korea, though no diplomatic breakthrough has been reached yet.

WASHINGTON (Sputnik) – The United States is involved in informal talks with representatives of North Korea, though no diplomatic breakthrough has been reached yet, Thomas Pickering, the former US Ambassador to Russia and US Under Secretary of State for Political Affairs, told RIA Novosti in an interview.

In May, the North Korean Foreign Ministry's bureau chief for North America, Choi Sun Hee, said she had met with Pickering, not ruling out the possibility of bilateral contacts with the United States "under the right circumstances."

"Without reference to the confirmation of any particular meeting or not, I think that it's clear to say that we have engaged in ‘track two’ discussions [informal meetings between the representatives of state and non-state actors] with North Koreans, the ones they've talked about. My own view is that they have been useful, but they have not led to any instant diplomatic breakthrough," Pickering said.

He stressed the importance of diplomatic and informal contacts.

"Sometimes ‘track two’ contacts are useful to the parties as a way of exchanging ideas and opening the door to new ways of thinking about the problem. ‘Track two’ discussions that I've been engaged in have involved briefings of the US government before and after the discussions have taken place. It's not an effort to supplant the government or to replace, but to try to help them understand… what's going on," Pickering said.

Narrow Majority of US Voters Doubt Trump Can Handle North Korea
Last week, the broadcaster NHK reported that Evans Revere, the former Deputy Assistant Secretary of State for East Asian and Pacific Affairs, had met with Choe Kang Il, the deputy director general for North American affairs at North Korea’s Foreign Ministry, on the sidelines of the international conference on security issues in Northeast Asia in Switzerland. No details of the meeting were disclosed though.

The situation on the Korean Peninsula has become aggravated in recent months due to Pyongyang's missile launches and nuclear tests, all conducted in violation of UN Security Council resolutions. On September 3, North Korea announced that it had successfully tested a hydrogen bomb that could be loaded into an intercontinental ballistic missile, which became Pyongyang's sixth nuclear test.

In light of these developments, the United Nations Security Council unanimously adopted its toughest-ever resolution against North Korea that restricted oil exports to Pyongyang, banned imports of textile products from the Asian nation as well as the country's access to gas liquids, among other restrictions. However, North Korea has not halted its missile and nuclear activity, and conducted another missile test on Friday.