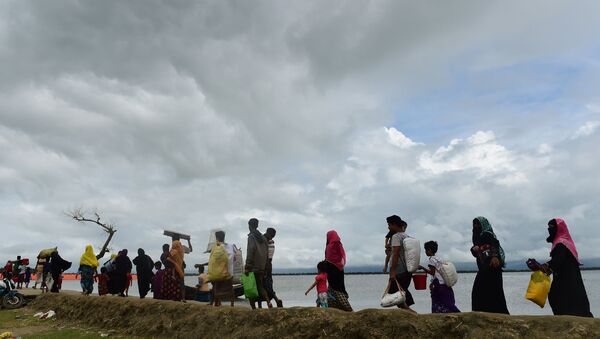 Myanmar's State Counselor and de facto leader Aung San Suu Kyi said that the country's authorities are not afraid of criticism of the international community because of the policy towards the Rohingya crisis.

"I ask the international community to help us find new ways that are more constructive and daring to resolve the problems we have," Aung San Suu Kyi said, as quoted by Channel NewsAsia in her first address to nation since the August escalation of the Rohingya crisis.

She condemned human rights violations and said that Myanmar's authorities are prepared to start the verification of status of those Rohingya who had fled Myanmar "at any time."

"We are concerned to hear the number of Muslims fleeing areas to Bangladesh… We want to find out the cause of the Rohingya exodus to Bangladesh, as many remain in Rakhine despite the 'state of turmoil,'" Aung San Suu Kyi continued.

Aung San Suu Kyi said that authorities intend to carefully examine the situation and listen to all incoming arguments and counterarguments.

India Rebuts Attempts to Make It 'Villain' in Rohingya Refugee Crisis
Myanmar's authorities would like to end the suffering of the Rohingya as soon as possible, Aung San Suu Kyi pointed out.

Rakhine is a site of frequent clashes between Myanmar's Muslims and Buddhists. Official authorities and the Buddhist population consider Rohingya to be illegal immigrants from Bangladesh. The conflict, which started about a century ago, escalated in 2012, when thousands of Muslim families sought asylum in the special refugee camps on the country's territory or fled to Bangladesh.

Aung San Suu Kyi has been Myanmar's State Counsellor, a position akin to prime minister, since 2016. Despite her ambition to become the nation's president, Myanmar's current constitution bars her from presidency because her two sons are UK citizens and she is a widow, which makes her not eligible.

Although Aung San Suu Kyi is in fact the head of the country, the main authority in the state of Rakhine belongs to the military, responsible for control of the situation.

The military itself assures that the purpose of the operation in the western state is to fight the militants and it is not directed against the civilians.