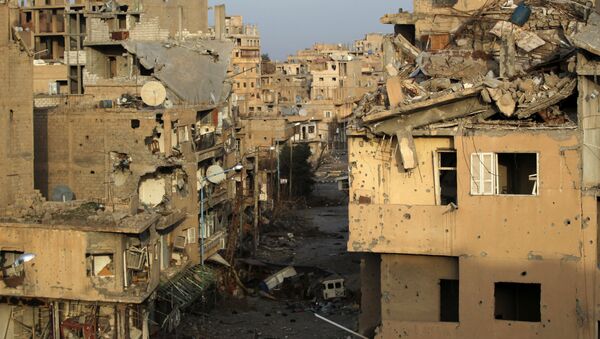 According to a military diplomatic source, representatives of Russia and the United States could hold a meeting this week on the US initiative on the situation in the Syrian city of Deir ez-Zor.

MOSCOW (Sputnik) – Representatives of Russia and the United States could hold a meeting this week on the US initiative to handle the situation in the Syrian city of Deir ez-Zor to discuss the areas of responsibility of the sides and coordinate the fight against the Daesh terrorist group (ISIS), a military diplomatic source told Sputnik.

"They [the US] said that we should meet this week, agree [on issues] including on Deir ez-Zor … We speak of determining areas of responsibility," the source said.

According to the source, the Russian side presented its preliminary proposals on the issue.

"We sent them a map with a line [of demarcation]," the source said.

Syrian Army Defeats Daesh in Southeast Deir Ez-Zor Districts, Reaches Euphrates
The successful Deir ez-Zor operation was the biggest breakthrough against Daesh since the terrorist group first launched an offensive in the province.

The terrorists had been blockading Deir ez-Zor since 2014, with food and other supplies only being airlifted into the city. Daesh also took control over a large swath of the province of Deir ez-Zor and cut off roads to government-held districts.