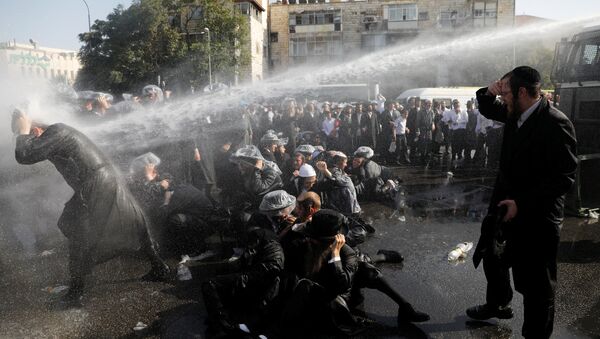 Nearly a dozen ultra-Orthodox Jews were arrested in Jerusalem after violent clashes with police and riot control forces following protests over a law on mandatory conscription into the Israeli Defense Forces.

The clashes took place Sunday after the arrest of 40 Orthodox Jews who refused to serve, including the grandson of a rabbi from the Toldos Avrohom Vitzchok, a strongly anti-Zionist Hasidic movement based in the Jerusalem neighborhood of Meah Shearim, where the protests took place.

Before clashes began, Rabbis from Toldos Avrohom Vitzchok gave speeches, carried a banner reading 'We're Jews and therefore will not enlist in the Zionist army," and blocked off a local thoroughfare to traffic.

Both sides were reported to have used violence, although photo and video evidence from the protest show the police employing especially brutal behavior.

Protesters threw stones and garbage cans and blocked off roads, while police and army officers were seen punching, kicking and violently shoving protesters, as riot control trucks sprayed protesters from a water cannon. Clips also showed police attacking passersby who weren't even part of the protests.

Ultra Orthodox Jew in #Jerusalem protest the law that will allow the Israeli government to draft them to the #Israeli army. pic.twitter.com/gDOdCNx6EI

Conflicting reports estimate that between eight and 11 protesters were arrested. Two more were reported hospitalized. Police said that seven of their officers were also wounded and required medical assistance.

Police defended their behavior, issuing a statement saying that protesters had "disturbed the peace," "laid down on the road," and "shouted slogans against the police; some of them threw stones at police." However, the Ministry of Justice department involved in investigating police misconduct has begun collecting testimony and footage over allegations of police brutality.

In Israel, the Toldos Avrohom Vitzchok sect is considered extremist, but not violent. Members rarely hold demonstrations, and, as a rule, don't call for attacks on the military.

Compulsory military service is a delicate issue in Israel, where all men and women over the age of 18 must serve two years and eight months, or two years, respectively. Ultra-Orthodox Jews oppose compulsory service, some arguing that their seminary studies are just as important to the community, while others believe that the Jewish state itself should cease to exist.