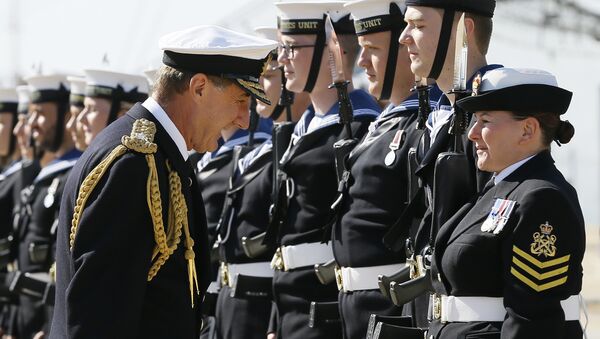 Less than a month after the UK's flagship aircraft carrier reached Portsmouth with much fanfare, the former head of the Royal Navy has warned without greater investment, Britain will have the military capability of a "Third World" country.

The UK will have the military capability of a "Third World nation" unless defense spending is increased, former First Sea Lord Admiral Sir George Zambellas has warned.

Zambellas, who commanded Plymouth-based frigates HMS Argyll and the former HMS Chatham, was head of the Royal Navy for three years before his retirement in April 2016.

In an interview with the Sunday Times, Zambellas said, "someone has to speak out" about the state of the Armed Forces, telling the paper "either [we] put more money in or [we] stop doing serious things and disappear into a Third World nation, security-wise, even though we are spending billions of defense."

"There is a suggestion there's lots more efficiencies to be made. There are not. I've been helping to deliver efficiencies for my 37 years in the Navy. We have reached the bottom of the efficiency barrel and we all know that because the Navy is so hollowed out. It hasn't got enough missiles and spares. It's very short of the integrated support that is needed as a single service," he cautioned.

This is where UK taxpayers £178bn spend on military equipment is going. https://t.co/vR6rNvgGPX pic.twitter.com/PDkLvymRgO

​Zambellas suggested the Royal Navy required 24 frigates and destroyers at a minimum — currently, there are only 19 — with the UK's response to Hurricane Irma as indicative of the shortages facing the Navy.

​Since the disaster struck, Royal Fleet Auxiliary Mounts Bay has been distributing aid on the devastated islands, while HMS Ocean is expected to arrive in due course.

While portrayed in the mainstream media as a demonstration of Britain's global reach, Zambellas noted the UK's efforts depended entirely on a single Royal Fleet Auxiliary ship. He said it demonstrated "just how stretched the global post-Brexit Navy is going to be."

Official anxieties about the UK's waning military clout are nothing new. In July, Conservative MP Bob Stewart described the size of the UK's armed forces as "laughable," and called on ministers to exceed the NATO target of spending two percent of GDP on defense.

Nonetheless, the Lord Admiral's intervention is perhaps the most serious public criticism leveled by a former senior officer.

His intervention will likely be particularly unwelcome to ministers, given the UK's flagship aircraft carrier, HMS Queen Elizabeth, arrived in her home port of Portsmouth in August after almost two-decades of uncertainty and delays with much fanfare.

What officials failed to acknowledge quite so loudly, however, is the 280-meter-long carrier, manned by a crew of 700, cannot actually deploy planes as yet — and it is expected it will take another 18-months before it becomes fully operational.

The "fifth generation" jet fighter has stealth capabilities, advanced networked electronics for situational awareness and low-probability intercept radar, among other gadgetry, and is the most expensive weapons system ever conceived. Prices range between US$100 million and US$130 million per plane, and the UK has pledged to buy 138 F-35s — the first squadron will arrive at RAF Marham in Norfolk in 2018.

However, serious questions hover over whether the HMS Queen Elizabeth will even be able to serve as a launchpad for these jets.

Sweeping defense cuts pursued by the Conservatives since 2010 mean other machinery in the UK's military arsenal is ill-equipped to receive data from the "world's technologically advanced plane" — meaning they must be improved, lest the stealth jet's communications are intercepted by enemy forces.