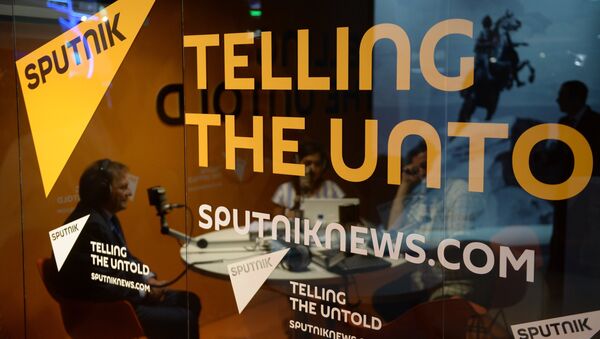 © Sputnik / Konstantin Chalabov
/
Go to the mediabank
Subscribe
International
India
Africa
Radio Sputnik is capable of things that you wouldn't expect from mere mortals. That's what three US lawmakers imply by saying that Sputnik's new FM station in Washington, DC influenced the recent presidential election - this despite the fact that the station started broadcasting only this summer, several months after Trump won the 2016 election.

The "the Russians did it" hysteria reached a new level on Monday when three members of the House of Representatives wrote an open letter to the chairman of the Federal Communications Commission, openly demanding the Washington DC radio station broadcasting Radio Sputnik's programming — 105.5 FM — be shut down. Their reason? The three distinguished members of Congress — Anna G. Eshoo, Michael F. Doyle and Frank Pallone Jr. — are shocked that those bloody Russians "may be using our country's own airwaves to undermine our democracy." It's a pretty strong statement, especially when coming from elected officials. Extraordinary claims require extraordinary evidence, though. And they do their best, bringing up such damning proof as a media report:

"An article published by the New York Times Magazine (9/13/17) titled "RT, Sputnik and Russia's New Theory of War" suggests that Sputnik, a radio network funded by the Russian government, was used as part of the Kremlin's effort to influence the 2016 presidential election. In Washington, D.C., listeners can tune their radios to 105.5 FM to hear Sputnik and Russian government's effort to spread misinformation to influence U.S. policy and undermine our elections. This means the Kremlin's propaganda is being broadcast over a licence granted by the FCC and the Russian government may be using our country's own airwaves to undermine our democracy." 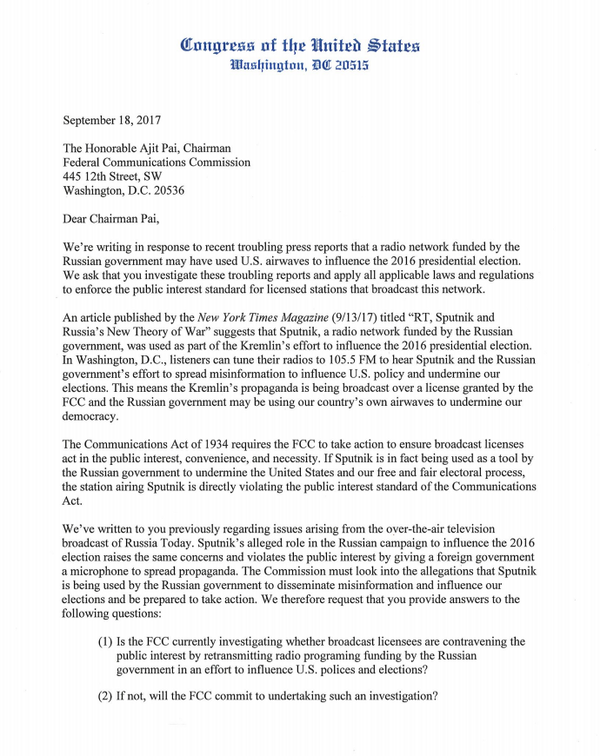 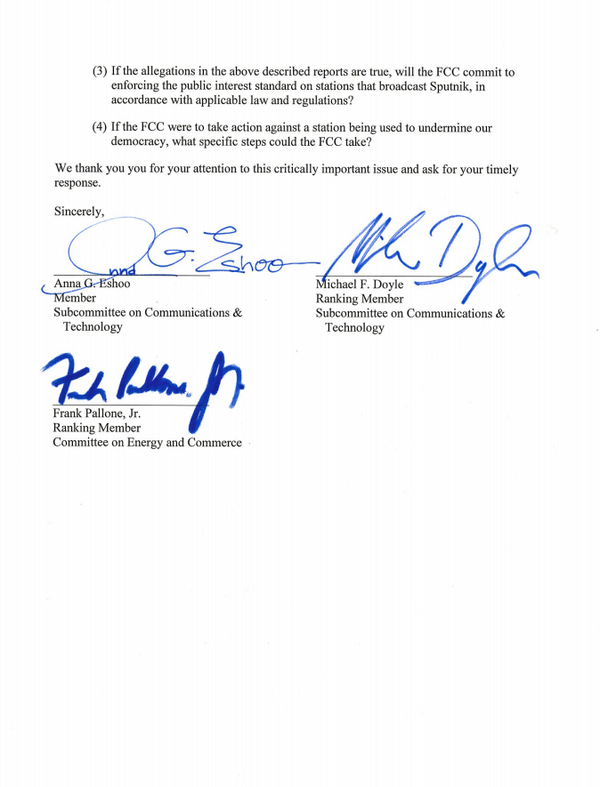 Media reports portraying Sputnik and RT as Russia's all-powerful tools of influence are nothing new. If you believe them then you believe that all the CNNs and MSNBCs of the world combined with The New York Times and The Washington Post can't withstand the competition from RT and yours truly. However, in this particular case, the representatives in their scaremongering zeal surpassed the limits of time and space as well as plausibility. The station named in their letter — 105.5 FM in Washington DC — only started broadcasting Radio Sputnik's programming on July 1, 2017, eight months after the presidential election and six months after Trump's inauguration. Sputnik reached out to the three accusing representatives to clarify how the station that started broadcasting months after the election could have influenced its outcome. However, the distinguished members of the House didn't comment on this paradox worthy of Einstein's consideration.

Russia
Moscow Reserves Right to Retaliate Over FBI Probe Into Sputnik
The latest attack on Sputnik comes just days after a Yahoo News report claimed that the FBI is investigating Sputnik to determine whether it needs to register as a foreign agent under the FARA act, despite clear exclusions from such demands for media outlets. Earlier, RT confirmed that it received a letter from the Department of Justice requesting that its US production company register under FARA.

Sputnik and RT's editor in chief Margarita Simonyan, responding to reports about the investigation said: "Freedom of speech is turning in its grave. It was killed by those who created it," and called the crackdown on journalists "disgusting."