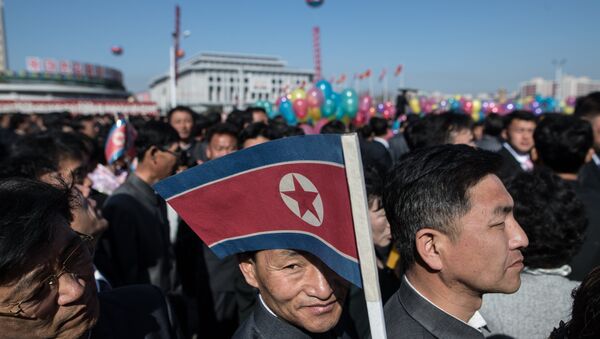 © Sputnik / Iliya Pitalev
/
Go to the photo bank
Subscribe
According to the spokesman for the South Korean Ministry of Unification, humanitarian aid should be delivered to North Korea regardless of the current political situation and toughened sanctions.

MOSCOW (Sputnik) – Humanitarian aid should be delivered to North Korea regardless of the current political situation and tougher sanctions against Pyongyang, Baik Tae-hyun, spokesman for the South Korean Ministry of Unification, said on Monday.

Black Market Bombsquad: How North Korea Gets Around UN Sanctions
On September 11, the UN Security Council unanimously adopted its toughest resolution yet against North Korea over its latest nuclear test and repeated missile launches. The adopted measures restrict oil exports to Pyongyang, ban imports of textile products from the Asian nation as well as the country's access to liquid gas, among other sanctions.

"The government's basic stance is that humanitarian help to vulnerable people in North Korea should be continued regardless of the political situation. This [issue] is separate from sanctions and pressure," Baik said, as quoted by Yonhap News Agency.

This position, which is aimed at helping those North Koreans in need, is shared by the international community, the spokesman added.

"The government is sternly responding to North Korea's provocations with pressure and sanctions," Baik pointed out.

On Thursday, South Korea is going to decide whether to allocate $8 million for infants and pregnant women in North Korea through UN agencies, the same news agency reported, adding that opponents fear that the decision on providing North Korea with humanitarian aid would compromise the international sanctions against Pyongyang.

Last Friday, North Korea launched a ballistic missile that flew over Japan and traveled a total of 3,700 kilometers (2,299 miles) before falling into the Pacific Ocean.