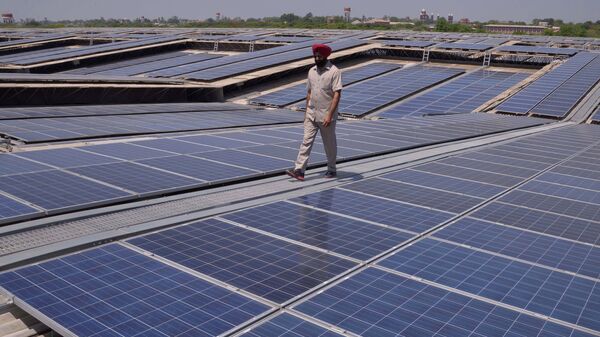 The use of solar power doubled globally in 2016 and is on track to double again over the next two years.

As nations and economies signal their intention to move away from the widespread and indiscriminate use of fossil fuel, the solar power industry is leaping into the breach, growing exponentially while an old-guard oil industry studies how to jump on the bandwagon without impacting the bottom line of shareholders and investors.

While current total global energy output is measured in the hundreds of thousands of terawatt hours, the small solar percentage is expected to fuel its rapid adoption as a global energy source, according to a CNBC report.

"Solar is growing exponentially, is what I don't think people realize," according to Norway-based energy executive Steve O'Neil.

"Every two years, the installation rates are doubling and so it's happening around the world now very quickly," he said, cited by CNBC.

Following economies of scale, a rapid rise in the use solar power up from single-digit percentages in the global output is resulting in a concurrently rapid drop in the cost of producing the resource, another indicator fueling the speedy development and implementation of sun-based energy technologies around the globe.

"There's no doubt that costs are going to continue to come down," O'Neil observed, adding, "Now, around the world, solar energy costs about 8 cents a kilowatt hour. That's down 70 percent since 2010."

"Those costs are going to continue to come down," he asserted, cited by CNBC.

Significant improvements in battery technologies, driven in part by the electric automobile industry, are bringing the utility of solar power even to areas that do not experience reliable sunlight.

"Solar can be deployed anywhere. It's fully scalable, it's quick to deploy," said O'Neil.

"You can do it on a rooftop, you can do it on ground, on water," he added, pointing to its ability to be installed practically anyplace on the planet that gets sunlight. "It's just one of the advantages of solar," he remarked.