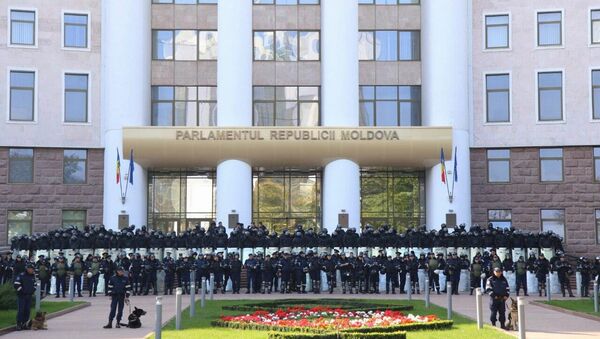 A rally against the mixed electoral system was held in Moldova's capital Chisinau on Sunday next to the building of the country's parliament, a Sputnik correspondent reported.

CHISINAU (Sputnik) – On July 20, the Moldovan parliament approved a bill introducing a mixed electoral system in the country. It was supported by Moldovan President Igor Dodon. The law came into force on July 21 after its official publication. The vote on the transition to the new electoral system was held against the backdrop of rallies of both proponents and opponents of the new legislation.

Dodon: Issue of Foreign Troops Withdrawal From Moldova Unlikely to Go To UNGA
Representatives of non-parliamentary political groups, such as Dignity and Truth Platform Party (PPDA), headed by  Andrei Nastase, and the Action and Solidarity Party (PAS), headed by former Moldovan Education Minister Maia Sandu, gathered near the building of the Moldovan parliament. Representatives of the Liberal Democratic Party, which is taking five seats in the parliament, also participated in the rally.

The organizers of the rally stressed that the protest would not be the last one to be held.

"We should be united. In the end of the rally we will adopt a resolution which will be submitted to the European authorities," Nastase said.

According to the resolution adopted during the rally, the main demand of the protesters is to repeal the law. The demonstration lasted nearly one hour.

The protesters then headed to the building of Moldova's public television. The city center is partially closed for traffic.

Moldova's General Police Inspectorate Head Alexander Pinzari told Sputnik that nearly 1,500 people were taking part in the demonstrations. The police noted that public order and safety were ensured by a sufficient number of police officers. No incidents have occurred during the rally.

According to the controversial law, 50 members of the parliament will be elected on proportional party lists, while the remaining 51 lawmakers will be elected in uni-nominal constituencies on a first-past-the-post basis. The proposal to switch to the majority-vote system was submitted in March by the Democratic Party, which has the majority of seats in the parliament. Following the debates and strong objections from the opposition parties, it was decided to implement a mixed system. While the next parliamentary election in Moldova is scheduled for 2018, the opposition parties claim that the adopted changes will significantly decrease their representation in parliament.