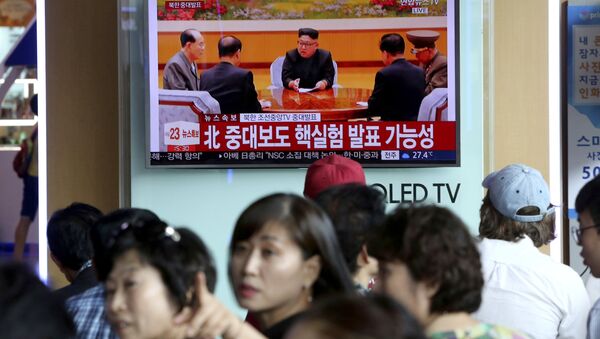 Finian Cunningham
All materials
You'd have to laugh – if it were not so grave. The Trump administration says that it is running out of patience for a diplomatic solution to the Korea crisis.

US Threats to Stop Trade With China Over North Korea Nothing But 'Blackmail'
French President Emmanuel Macron in a phone call with Russia’s Vladimir Putin was the latest world leader to endorse Moscow’s appeal for negotiations over the Korea crisis.

Council of EU Expands North Korea Sanctions List After Latest Missile Launch
Meanwhile, the American president was touring the Anderson air force base near Washington where he again boasted of US “overwhelming” military power to wipe out North Korea.

Asia
Japan, S Korea, US Agree to Enhance Cooperation After North's Missile Launch
Former US President Jimmy Carter, who has visited North Korea on three occasions, has forthrightly stated that Washington must commit to peace and enter into talks with Pyongyang.

Asia
Japan, S Korea, US Agree to Enhance Cooperation After North's Missile Launch
The stark reality is that the US rulers and their military-driven economy do not want peace in Korea. Hence, they refuse to sign a peace treaty or give diplomacy any chance. Conflict with North Korea is simply vital for US corporate capitalism, as well as allowing the US to project its military power over perceived rivals in Russia and China.