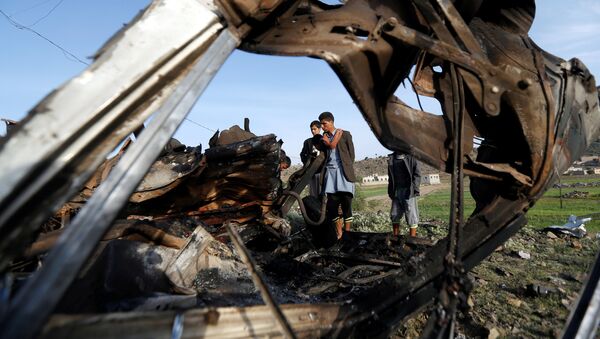 European countries such as Italy continue to increase arms exports to Saudi Arabia in spite of European Parliament resolutions calling for an embargo on sales to Riyadh in light of violations of human rights and international law in Yemen.

A recent European Parliament resolution which calls for an arms embargo against Saudi Arabia is no deterrent to Italy, which continues to increase its arms sales to the Middle East despite concerns that the flow of weapons is contributing to instability there.

Enrico Piovesana, an Italian journalist and director of the Center for Monitoring of Arms Expenditures (MILEX), told Sputnik Italia that Italy's exports have risen dramatically.

Moral Authority? 'The UN Has No Real Power to Stop the Yemen War'
"This is significant growth, and the Italian foreign ministry considers it a triumph: in its last report, it said that this sector has finally emerged from the [economic] crisis thanks to the flexibility of its supply."

According to the Stockholm International Peace Research Institute (SIPRI), Italy was the world's eighth largest arms exporter in 2016.

Italy is also third on the global ranking of arms exporters by number of countries to which it exports, Piovesana said.

"Saudi Arabia is the sixth largest client for Italian weapons producers," he explained.

The non-binding resolution passed by the European Parliament on Wednesday is the third call in two years by EU parliamentarians to enforce EU Council rules on the arms export control and impose an embargo on exports to Saudi Arabia.

On September 5, the UN Human Rights Office issued a report recording violations and abuses of human rights and international humanitarian law which occurred in the two-and-a-half years since Saudi Arabia and its coalition partners launched a bombing campaign in Yemen to overthrow the Houthi rebels who ousted former President Abdrabbuh Mansour Hadi.

Saudi Arabia’s ‘Bloody Execution Spree’ Continues
Between March 2015 and 30 August 2017, at least 5,144 civilians have been documented as killed and more than 8,749 injured, according to the UN figures. Some 3,233 of the civilians killed were reportedly killed by Coalition forces, whose airstrikes continued to be the leading cause of civilian casualties.

Giorgio Beretta, an analyst from the Union of Italian Disarmament Associations, told Sputnik that Italian-made bombs are known to have been used in airstrikes on civilians.

"The UN report talks about documentation confirming the use of Italian bombs in civilian areas in Yemen. These are bombs manufactured by the Italian company RWM, which were produced and exported with the permission of the Italian government. Both the Gentiloni government and the previous Renzi government gave permission for the export of these bombs."

​"Some EU countries, such as Sweden and the Netherlands, have suspended the supply of military equipment to Saudi Arabia. Other countries, such as Germany, decided to suspend the supply of weapons that could be used by Saudi Arabia in the conflict with Yemen. The UK, France and Italy continue to deliver supplies. In 2016, Italy delivered nearly 20,000 aerial bombs worth more than €411 million, which is the country's largest supply of bombs since the end of World War II. It is absolutely clear that this is a political decision," Beretta said.

Saudi Arabia has become the world's second largest arms importer after India, with an 8.2% share in the market. While Italy has increased its supplies, they are still dwarfed by the US, which exports 52% of Riyadh's imports, and the UK, which exports 27%, according to the SIPRI.

"It should be noted that that Italy is not the largest supplier to Riyadh. Trump signed a contract to sell $110 billion million of weapons to the Saudis. But nevertheless, supplies from the EU are important since there are European components in many military systems that Saudi Arabia buys."

Beretta said that the European Parliament's resolution and the EU Council's Common Policy on arms exports are rather toothless in the face of lobbying from arms producers.

Will Spain Stop Arming Saudi Arabia After Barcelona Terror Attack?
"International norms, as well as EU norms, don't provide for sanctions for those who violate the International Arms Trade Treaty, as well as for those who contradict EU position. This is a big mistake, but it's not surprising [because] these same countries exerted strong pressure to prevent the introduction of sanctions measures. At the international level, the only competent authority that can actually impose or remove sanctions is the UN Security Council. At the EU level, this is the EU Council."

"However, there is another way: in the case of Riyadh, if one of the member countries violates the embargo, another country may legally refuse to sell arms to them. For example, if the UK violates this possible embargo, Italy could stop supplying arms to London. It can break the vicious circle. But let's not forget that lobbyists and large arms corporations will exert pressure and try to prevent sanctions measures for violators of the embargo," Beretta warned.