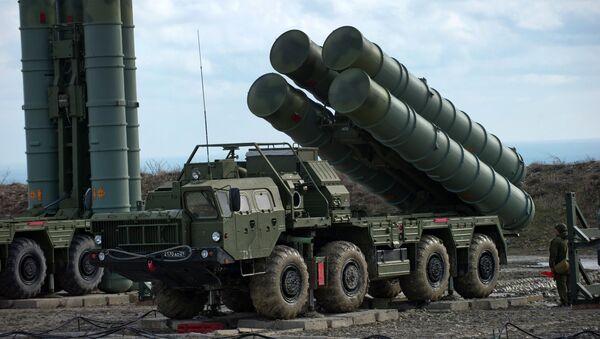 © Sputnik / Sergey Malgavko
/
Go to the photo bank
Subscribe
Ankara is ready to conclude an arms agreement with Russia, a country which it considers ready to meet Turkey’s defense needs, a Turkish MP told Sputnik, commenting on his country's agreement to buy Russian S-400 missile systems.

In an interview with Sputnik Turkey, Murat Baybatur, press secretary of the Turkish parliament's Defense Committee, gave his thoughts on the Ankara-Moscow deal on Turkey's purchase of Russian S-400 missile defense systems and the West's reaction.

Commenting on German and Austrian plans to stop selling arms to Turkey, Baybatur expressed regret over their unwillingness to help Ankara tackle terrorism and the threat of Turkish territorial integrity.

"Germany and the Netherlands first deploy the Patriot missile systems in Adana and Gaziantep and three months later, they withdraw them from Turkish territory. It's time to act on our own. Thanks to the purchases of [Russian] S-400 systems, our state will be able to resolve its urgent tasks in the field of defense and national security," Baybatur said.

US 'Loses Ally and Money' Due to Russia-Turkey S-400 Deal
He described Russia as Turkey's neighbor, which has historical ties with Ankara and which "managed to create one of the most developed and reliable air defense systems in the world."

"Turkey pays money for the S-400 and there is nothing that could cause concern in this situation. If someone is concerned about this process, let them provide Turkey with the Patriot system or other missile systems," he added.

Baybatur also commented on the Pentagon's statement about America's intention to "speed up the process of Turkey being supplied with the defense systems that meet NATO standards." According to him, this is a "very remarkable" statement.

"The whole world knows that we have discussed the purchase of the S-400 systems with Russia. We discussed all the details, made an advance payment, with Russia behaving very constructively on this issue. The West apparently believed that Turkey and Russia would not be able to conclude such a deal. And now that the agreement is signed, they began offering to provide Turkey with weapons that can be integrated into the NATO system," he said.

According to Baybatur, "if the United States, Western countries and NATO are sincere in their intentions regarding the supply of air defense systems, then we must see their concrete actions in this direction."

"In addition, the use of such NATO systems is not an obstacle to the purchase of the S-400 by Turkey. We can use both of them, and there is no problem. But thus far, Western countries have consistently misled us on the issue, using all sorts of excuses. And they started talking about speeding up the work on this matter only after Turkey made its final decision. Go ahead please, if you want; the S-400 does not interfere with this," he concluded.

The Russia-Turkey talks on the delivery of S-400 systems started last year. On Tuesday, the Russian Federal Service for Military-Technical Cooperation announced in a statement that Moscow and Ankara had reached an agreement on the issue.

Erdogan Says Turkey's Deal With Russia on S-400 Supplies 'Made US Furious'
In turn, Turkish President Recep Tayyip Erdogan said that Ankara had made the first payment for the delivery. In turn, the Pentagon expressed concern over the issue, saying that a NATO interoperable missile defense system would be the "best option" for Turkey.

000000
Popular comments
Turkey is an example how NATO and US wish that all countries lose their independence; they are just creating military and economic colonies. We live in the world of a new type of neocolonialism; EU is a form of neocolonialism too.
Nitai
16 September 2017, 19:19 GMT2
000000
Will see who trick who and who benefits from who. It will be hard to get a hold on that system if the trick is not convincing enough. Russia want money, Turkey want to see how good the system is, the west want to reverse engineering. So, hope they are not using against Russia in the near future.
peaceactivist2
16 September 2017, 19:23 GMT1
000000
Newsfeed
0
New firstOld first
loader
LIVE
Заголовок открываемого материала
Access to the chat has been blocked for violating the rules . You will be able to participate again through:∞. If you do not agree with the blocking, please use the feedback form
The discussion is closed. You can participate in the discussion within 24 hours after the publication of the article.
To participate in the discussion
log in or register
loader
Chats
Заголовок открываемого материала
Worldwide
InternationalEnglishEnglishMundoEspañolSpanish
Europe
DeutschlandDeutschGermanFranceFrançaisFrenchΕλλάδαΕλληνικάGreekItaliaItalianoItalianČeská republikaČeštinaCzechPolskaPolskiPolishСрбиjаСрпскиSerbianLatvijaLatviešuLatvianLietuvaLietuviųLithuanianMoldovaMoldoveneascăMoldavianБеларусьБеларускiBelarusian
Transcaucasia
ԱրմենիաՀայերենArmenianАҧсныАҧсышәалаAbkhazХуссар ИрыстонИронауОssetianსაქართველოქართულიGeorgianAzərbaycanАzərbaycancaAzerbaijani
Middle East
Sputnik عربيArabicArabicTürkiyeTürkçeTurkishSputnik ایرانPersianPersianSputnik افغانستانDariDari
Central Asia
ҚазақстанҚазақ тіліKazakhКыргызстанКыргызчаKyrgyzOʻzbekistonЎзбекчаUzbekТоҷикистонТоҷикӣTajik
East & Southeast Asia
Việt NamTiếng ViệtVietnamese日本日本語Japanese俄罗斯卫星通讯社中文（简体）Chinese (simplified)俄罗斯卫星通讯社中文（繁体）Chinese (traditional)
South America
BrasilPortuguêsPortuguese
NewsfeedBreaking
02:55 GMT911 Call Reveals Boyfriend Was Seen 'Slapping' Petito Two Weeks Before Her Disappearance - Report
02:31 GMTBiden Reaffirms Strong US-UN Partnership at Meeting With Guterres
02:22 GMTIndia Cuts Off Communications, Internet in Kashmir Due to Terrorists, Reports Say
02:12 GMTMember of CIA Chief’s Team Affected by ‘Havana Syndrome’ During Work Trip to India, Report Says
01:22 GMTClimate Change-Driven Cyclones Could be Regular Sights in Europe in 30-50 Years, Meteorologist Warns
01:02 GMT‘License to Murder Children?’ Psaki Panned for Bringing Up Biden’s Losses in Kabul Strike Answer
00:38 GMTMilley Told Admiral to Halt Operations in Pacific That China Could Deem 'Provocative', Authors Claim
00:11 GMTPremier League Goals of the Weekend
YesterdayMali Looks for ‘Plan B’ to ‘Bolster Our National Defense’ As French Mission Exits, Leaving Chaos
YesterdayGlobal Pandemic Caused Significant Surge in Demand For Black Bridal Dressers, Fashion Experts Say
YesterdayCoronavirus Death Toll Surpasses 1918 Influenza to Become Deadliest Pandemic in US History
YesterdayIran's New Defense Minister Says Enemies Will Get 'Crushing Response' - Report
YesterdayBorrell Expresses Regrets That EU Countries Were Not Invited to Join AUKUS
Yesterday‘Go Back to Mexico’: Shocking Video of US Border Patrol on Horseback Seen Whipping Haitian Refugees
YesterdayCDC Recommends Admitting Afghan Refugees 21 Days After Measles Vaccine, Reports Say
Yesterday26 GOP Governors Demand Meeting With Biden Amid Deepening Frustration Over Border Crisis
YesterdayDiscovery of Bats With Close Sars-CoV-2 Relative Add More Evidence to Natural Origins of COVID-19
YesterdayFull Harvest Moon Lights Up Sky Over Buenos Aires
Yesterday‘I Got Chills’: Travel Blogger Finds Video of Gaby Petito’s Van
YesterdayTexas Governor Asks Biden to Declare Federal Emergency in Response to Border Crisis