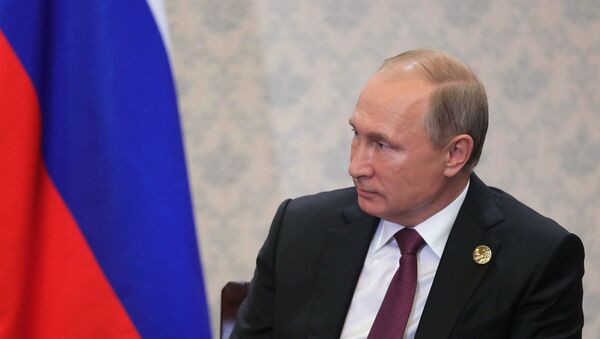 © Sputnik / Michael Klimentyev
/
Go to the photo bank
Subscribe
Vladimir Putin stated that Russia has contributed a total of $700 million to help Kyrgyzstan integrate into the Eurasian Economic Union.

"We allocated $200 million for this adaptation. We furthermore created a development fund in which Russia deposited another $500 million. In total, 31 projects are being implemented. Several hundred are to be implemented soon," Putin said in an interview with a Kyrgyz journalist, which aired in a RenTV broadcast on Saturday.

Putin: Russia, Kyrgyzstan Agree to Step Up Anti-Terrorist Cooperation
The money was used to develop various sectors of the Kyrgyz economy and the Central Asian state's large and medium-sized businesses, Putin added, stressing that the decision to help Kyrgyzstan adapt to EAEU membership was made by the Russian and Kyrgyz leaders.

Kyrgyzstan, one of the less developed states in the bloc, joined the EAEU in August 2015, months after the other states joined in January that year. Its accession process included the adaption of its economy to EAEU standards, as well as changes to its legislation and customs infrastructure.

In late June, Russian Foreign Minister Sergei Lavrov told journalists that almost 50 countries had expressed their interest in cooperating with the EAEU.