As US Popularity in Mexico Hits All-Time Low, Pentagon Aims to Bolster Alliance 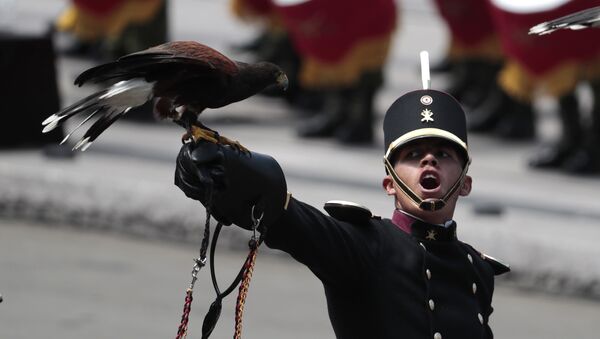 After the results of a new Pew Research poll showing Washington’s popularity with Mexicans to have hit an all-time low circulated among the media, US Secretary of Defense James Mattis met with his military counterparts in Mexico to shore up what is seen to be a rapidly deteriorating relationship between the two one-time close allies.

After eight years of increasing good will between Washington and Mexico City, diplomatic relations between the two countries has now declined significantly, according to a new US Pew Research poll, and the Pentagon has quickly moved to send its top officials to deploy reassurances to the Central American country's military brass that, contrary to appearances, all is well between the two countries.

On a Friday visit to Mexico, US defense Secretary Mattis discussed the relationship between the neighbors with words like "trust," "respect," and "support," even as a nonpartisan Pew Research Center study released on Thursday revealed that more Mexicans now view the US in an unfavorable light than at any other time since Pew began keeping track of the issue in 2002, cited by CNN.

But Mattis, and several other ranking US military officials meeting counterparts taking part in Mexico's Independence Day festivities on Friday expressed only positive relations between the two neighbors.

In the Pew poll, however, Mexicans were revealed to have a deep distrust of US President Donald Trump, as well as in his unpopular border wall proposal. The poll also showed that few Mexican citizens agree that strong economic ties between Washington DC and Mexico City will help them. The results are strikingly different than a similar Pew poll conducted just two years previously.

The new survey, including 1,000 Mexican citizens, conducted between March and April showed that almost two-thirds of respondents indicated disfavor with the US, over double the same result in 2015, according to Pew Research.

Trump's strikingly low popularity with Mexican poll respondents, an eye-opening 5 percent, is a steep drop from even US President Barack Obama's lowest rating among Mexicans, at 38 percent in 2011, noted the Pew organization in its new findings.

Mattis, however, seemed unfazed by any hint of distrust on the part of Mexicans toward the Trump administration, pointing toward ongoing efforts by US border services to stop, or at least diminish, collateral damage from Washington's ongoing War on Drugs.

"People are keenly aware of their crime problems," Mattis stated, adding, "They're dealing with them. The drug trafficking going into America, we're working together on it."

"I'm there to support them in dealing with them," the top US military official asserted.

Joined on his Mexico junket by Admiral John Richardson, US chief of naval operations, and Air Force General Lori Robinson, head of US Northern Command, Mattis stated unequivocally his intent to improve relations between the neighbors.

"I'm going down to build the trust and show the respect on their Independence Day," Mattis declared, cited by Defense One.