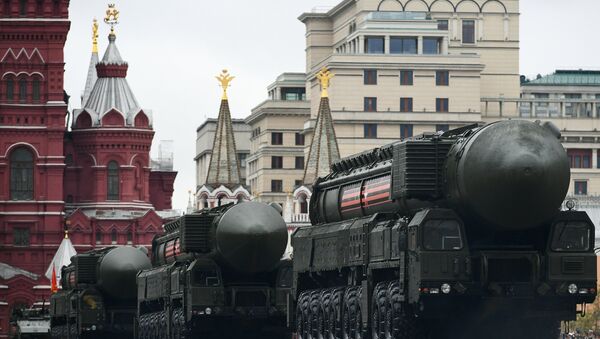 With the Yars, Sarmat and Topol-M heavy intercontinental ballistic missiles poised to constitute the main land-based element of Russia’s nuclear triad, the Defense Ministry is making sure that they never come in harm’s way.

There is an entire family of armored vehicles out there ensuring the maximum possible protection for Russia’s mighty intercontinental ballistic missiles, each being a sentinel guarding the country.

The self-propelled all-terrain missile systems are highly effective because they can move around and avoid being detected by enemy surveillance.

One downside, however, is that while a stationary reinforced-concrete missile silo can be destroyed only by a direct hit from a heavy bunker-busting bomb or warhead, a mobile missile system can be taken out even by a small group of Special Ops troops armed with grenade-launchers, or a powerful antitank mine.

Russia Successfully Test-Launches Yars ICBM
Russia’s current arsenal of such mobile missile systems now consists of Topol, Topol-M and Yars ICBMs. To make sure they are not destroyed or subverted,  each such unit comes with  an escort of specialized fighting vehicles that look as if they came from a sci-fi movie.

One such defender is the Taifun-M anti-diversion armored reconnaissance vehicle developed specially for the Russian strategic missile forces.

Armed with a single remotely-controlled 7.62 —mm machine gun, the Taifun-M is fitted with a mast-mounted radar, FLIR and optical sensors. Some sources report that it can spot enemy vehicles at a range of 6 kilometers (3 miles) and enemy troops at a range of 3 kilometers (1.5 miles).

The Taifun-M also carries a small drone to monitor large areas and a portable mine detector and a system that suppresses radio-controlled explosive devices.

Defense Ministry officials said that the “honorary escort” of protective vehicles, which also includes mobile minesweepers and electronic jammers to neutralize radio-controlled explosive devices, make sure that the new generation of Russian ICBMs are well protected against enemy attack, no matter where it may come from.

Cruise Missile Won’t Get Them

As for America’s much-touted “Prompt Global Strike” featuring cruise missiles, Russian military experts dismissed this as a “fairy tale” that should not be taken seriously.

“The media often say that one could use a disarming strike against us and we will have nothing left to respond. This is bulls**t. Our military doctrine says that even a conventional attack on our nuclear installation will be considered the start of a nuclear war that will entail a massive nuclear retaliatory strike. That’s why no one will ever risk attacking a nuclear arsenal with conventional weapons,” military expert and the former commander of Russia’s Strategic Missile Forces Viktor Yesin told RIA Novosti.

In September, Russia conducted another successful launch of a silo-based Yars ICBM from Plesetsk.

Yars ICBMs, each  reportedly carrying between three and six 300 kiloton warheads, are now being delivered to several missile regiments in the Urals and Siberia.