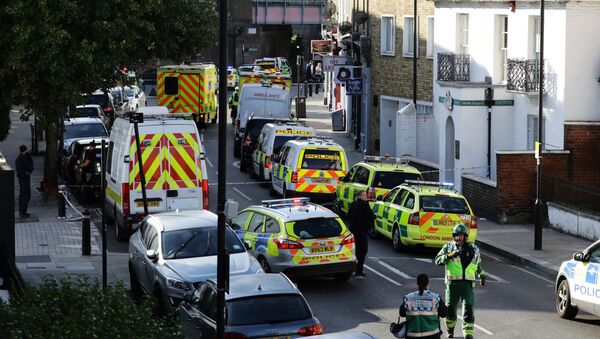 People suffered burns after a white container exploded inside a train car at London's Parsons Green tube station, according to local media, resulting in a stampede and injuries. Police and medical services are responding to the incident.

Pictures appearing in the wake of the incident show emergency services working on the scene and people fleeing it, causing stampede. The Parsons Green tube station was closed and train services on the line were halted. Police called on people to avoid the area near the station.

"We were called at 8:21 a. m. and we have information there was a fire on a train eastbound at the platform at Parsons Green. We have got two fire engines there," a London Fire Brigade spokeswoman said as quoted by The Sun newspaper.

Someone on @bbc5live was at #ParsonsGreen. Says massive crush and injuries to escape station.

I'm safe — just had to run for my life at #ParsonsGreen station — huge stampede, lots injured. Not sure why — fire/explosion mentioned. pic.twitter.com/zRvRPWOuzA

A picture of the alleged container has appeared on social media. The object reportedly went off toward the rear of the train.

Closer image supposed bag that exploded inside subway at #ParsonsGreen in London, wires can be seen hanging out pic.twitter.com/ITy0nsMRgj

The Metropolitan Police, the London Ambulance and the London Fire Brigade had arrived at the underground station.

We're aware of an incident at #ParsonsGreen station. Officers are at the scene. The station is closed. More information as we get it.

We have a number of resources and specialists officers in attendance at the incident at #ParsonsGreen tube station https://t.co/GYOEv6kMua pic.twitter.com/bdiCr4hWcZ

The incident has not been classified a terrorist attack.

People took to Twitter to express their worries and hopes that the incident had not left anyone dead.

Hope everyone is ok in #ParsonsGreen

Ffs leave my city alone. Thoughts are with all those involved #parsonsgreen

I hope whatever has happened at #ParsonsGreen isn't too serious. Thoughts go to all involved.