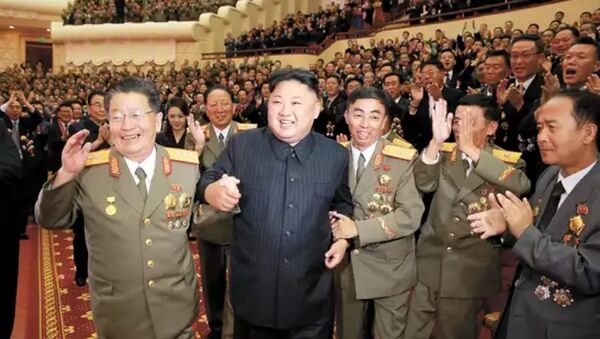 The most recent ballistic missile launch was "guided" by Kim himself, which is somewhat customary for the 33-year-old. Kim's other goal is to "make the US rulers dare not talk about military option for the DPRK," the leader was quoted as saying by KCNA.

Speaking during Friday's launch of a ballistic missile in Pyongyang, Kim said the Communist state had nearly reached "the goal of completing its nuclear force" despite "limitless sanctions and blockade," according to KCNA.

Vasily Nebenzia, Russian Ambassador to the UN, said "we believe that all threats, tests, missile launches and mutual threats must be abandoned, and substantial negotiations must be carried out," following a UN Security Council meeting called after North Korea's latest missile test.

The projectile flew an estimated 2,000 kilometers, including over Japanese prefectures, before falling down into the Pacific Ocean. The missile reached a peak altitude of 770 kilometers.

"As we consider the best offense posed by a hostile regime in North Korea, the least free nation in the world, we first look to our regional allies, South Korea and Japan," US Secretary of State Rex Tillerson told reporters Friday afternoon.

"US Pacific Command detected and tracked what we assess was a single North Korean ballistic missile launch," spokesman David Benham said Friday, director of media operations at USPACOM. The "initial assessment indicates the launch of an intermediate-range ballistic missile."

000000
Popular comments
The US is finding themselves in a funny position. For the first time in decades they may have legitimate reasons to worry about, however having cried wolf too many times no one can take them seriously, an article in The National interest speak about one of North Korea's Gorae class submarine capable of giving an effective second strike capability in a few years. Even if we speak about a crude capability one can easily (with or without a certain malicious delight) Imagine the nightmare of the strategist of the Pentagon. The wolf was not Syria, not Libya not Iraq nor even ambush in a dark winter cauldron in western Ukraine. The wolf may just be An Asiatic one , Wolves are also known to be aggressively territorial. Inaction for Washington will come with a price in the short term or so they think.

Anton KOMAROV
16 September 2017, 02:43 GMT
000000
Even layman know that Kim would not stop short of getting hang like Saddam. Whether the so-called world community like it or not, No body can turn back the clock on NK unless a dusty war (beyond bloody). And Kim is smart enough to shoot his arrow on Guam, but if a war is started, the real Guam = 3,000,000+ Souls in Seoul.
peaceactivist2
16 September 2017, 04:38 GMT
000000
Newsfeed
0
New firstOld first
loader
LIVE
Заголовок открываемого материала
Access to the chat has been blocked for violating the rules . You will be able to participate again through:∞. If you do not agree with the blocking, please use the feedback form
The discussion is closed. You can participate in the discussion within 24 hours after the publication of the article.
To participate in the discussion
log in or register
loader
Chats
Заголовок открываемого материала
Worldwide
InternationalEnglishEnglishMundoEspañolSpanish
Europe
DeutschlandDeutschGermanFranceFrançaisFrenchΕλλάδαΕλληνικάGreekItaliaItalianoItalianČeská republikaČeštinaCzechPolskaPolskiPolishСрбиjаСрпскиSerbianLatvijaLatviešuLatvianLietuvaLietuviųLithuanianMoldovaMoldoveneascăMoldavianБеларусьБеларускiBelarusian
Transcaucasia
ԱրմենիաՀայերենArmenianАҧсныАҧсышәалаAbkhazХуссар ИрыстонИронауОssetianსაქართველოქართულიGeorgianAzərbaycanАzərbaycancaAzerbaijani
Middle East
Sputnik عربيArabicArabicTürkiyeTürkçeTurkishSputnik ایرانPersianPersianSputnik افغانستانDariDari
Central Asia
ҚазақстанҚазақ тіліKazakhКыргызстанКыргызчаKyrgyzOʻzbekistonЎзбекчаUzbekТоҷикистонТоҷикӣTajik
East & Southeast Asia
Việt NamTiếng ViệtVietnamese日本日本語Japanese中国中文Chinese
South America
BrasilPortuguêsPortuguese
NewsfeedBreaking
06:10 GMTReports Reveal Name of Suspect in Sir David Amess' Shocking Assassination
06:02 GMTJapan's New Prime Minister Visits Crippled Fukushima Nuclear Plant
05:46 GMTBoris Johnson, Chancellor Sunak Reportedly at Odds Over Cost of UK Moving to Carbon-Free Economy
04:59 GMTSoyuz Spacecraft With First Feature Film Crew in Space Returns to Earth
04:30 GMTYou Shall Not Pass: Cat Boxes With Cute Shiba Inu
03:54 GMTFormer UT Professor Offered Job Back After Being Cleared of Inappropriate Ties With Beijing
02:53 GMTBiden Says It Is Harder Than Ever to be a Cop in America
02:52 GMTChina Tested New Space Capability With Hypersonic Missile in August - Report
01:49 GMTSoyuz Spacecraft With Film Crew Leaving International Space Station
00:33 GMTVienna Flaunts its ‘Explicit’ Artworks on OnlyFans Amid Censorship on Nudes
YesterdayVenezuelan Government to Suspend Negotiations With Opposition Over Extradition of Alex Saab to US
YesterdaySyria Accuses Israel of Killing Head of Cabinet’s Golan Affairs Office - Reports
YesterdayRobert Durst on Ventilator Battling COVID-19, Amid Life Sentence, Lawyer Says
YesterdayBill Clinton to Remain Hospitalised Until Sunday - Spokesman
YesterdayTexas Senate Passes Athlete Bill Targeting Transgender Youth
YesterdayNew Satellite Images Reportedly Show That Trump's Scotland Golf Course Wrecked a Sand Dune System
YesterdayAt Least 10 People Dead, 18 Missing in India's Kerala Due to Bad Weather - Reports
YesterdayPablo Escobar's 'Cocaine Hippos' Breeding Out of Control
YesterdayIsraeli Army Creates Secret Base to Monitor Iran's Activities - Reports
YesterdayMacron Slams 1961 Paris Police Killing of Algerian Protesters as 'Inexcusable' - Office