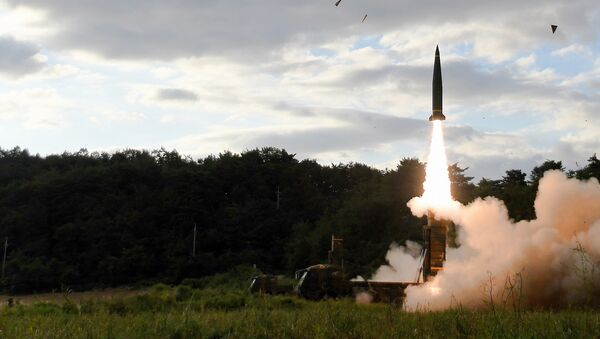 After North Korea launched a ballistic missile for the first time since the UN had passed a new resolution on Pyongyang, the EU has expanded the anti-DPRK sanctions list.

MOSCOW, (Sputnik) — Brussels added three entities and one individual to the list of those subject to anti-Pyongyang restrictive measures, thus implementing a part of the relevant UN Security Council resolution, the Council of the European Union said in a statement on Friday.

"The Council has added 3 entities, the Propaganda and Agitation department, the Central Military Commission of the Worker's Party of Korea and the Organisation and Guidance department, as well as one person to the lists of those subject to an asset freeze and travel restrictions, transposing part of the new sanctions imposed by UN Security Council resolution 2375 (2017)," the statement read.

The European Union has sanctioned 63 individuals and 53 entities in accordance with the UN policy, while also having 41 persons and 6 entities on its own North Korea sanctions list.

Kremlin Calls N Korean First Missile Launch Since New Sanctions 'Provocation'
The statement comes after  North Korea fired an intermediate-range ballistic missile in the early hours of Friday in violation of UN Security Council resolutions that bar it from researching ballistic missile technology. The missile flew over northern Japan before splashing into the Pacific, according to the US Department of Defense.

The latest missile launch comes just several days after the UN Security Council unanimously adopted new sanctions against Pyongyang as a response to North Korea's most powerful nuclear test conducted on September 3. The UN resolution bans Pyongyang from exporting textiles while capping how much crude oil and refined petroleum products can be imported. Natural gas condensates and liquids are also included among the items North Korea is restricted from importing in excess of UN guidelines.