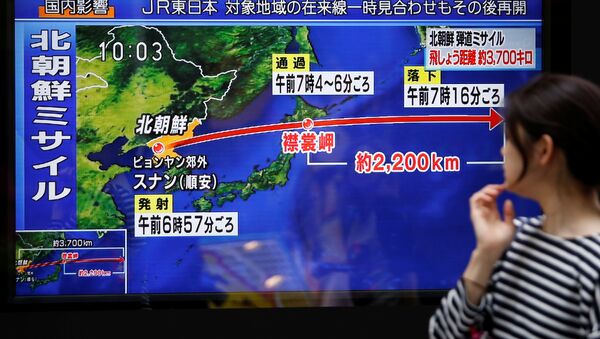 Early on Friday, North Korea fired a missile from the Sunan district of Pyongyang.

The unidentified projectile was heading east, according to published reports, after leaving the launchpad around 6:57 a.m. local time. The missile flew for about 20 minutes until falling into the Pacific Ocean at 7:16 a.m. about 2,000 kilometers east of Hokkaido, NHK reported citing Japanese government officials.

​Japanese citizens in several prefectures were warned to find shelter following reports that a missile was airborne, NHK reports, adding that the missile probably cruised over the Japanese island of Hokkaido.

"US Pacific Command detected and tracked what we assess was a single North Korean ballistic missile launch," Dave Benham, Director of Media Operations at USPACOM, said in a release, adding that the "initial assessment indicates the launch of an intermediate range ballistic missile."

The South Korean Office of the Joint Chiefs of Staff reports that US and South Korean personnel are currently investigating the details of the launch. Military analysts assess the missile flew 3,700 kilometers and reached a peak altitude of 770 kilometers, according to published reports.

Japanese denizens report Patriot Advanced Capability-3 (PAC-3) interceptor missiles were not launched in response. ​Some analysts believe the test was a direct response to the UN Security Council's most recent round of sanctions that were passed unanimously.

"At this moment, we have no information about any damage to ships or aircraft," Japanese spokesman Yoshihide Suga told reporters, adding, "there have also been no reports about missile debris falling in our territory."