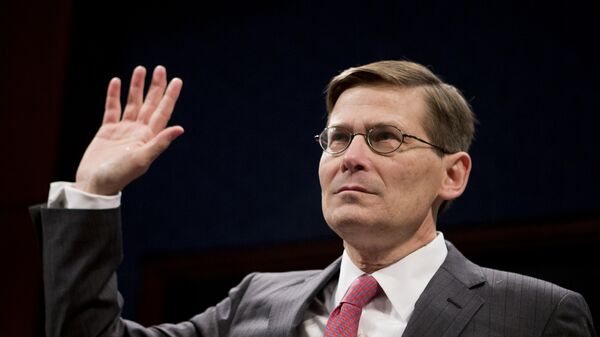 Former CIA acting director Mike Morell has resigned from his position with Harvard’s John F. Kennedy School of Government over former US soldier and convicted leaker Chelsea Manning’s appointment to a position with the school.

"I cannot be part of an organization that honors a convicted felon and leaker of classified information," Morell wrote in his open letter to Douglas Elmendorf, the Dean of the Kennedy School."Senior leaders in our military have stated publicly that the leaks by Ms. Manning put the lives of US soldiers at risk."

"As an institution, the Kennedy School's decision will assist Ms. Manning in her long-standing effort to legitimize the criminal path that she took to prominence, an attempt that may encourage others to leak classified information as well," Morell went on to write.

"I have an obligation to my conscience — and I believe to the country — to stand up against any efforts to justify leaks of sensitive national security information."

In response, Manning simply tweeted: "Good". "That is an official quote," she later added.

that is an official quote

In 2010, Manning was found guilty of leaking sensitive information regarding US operations in Iraq and Afghanistan to Wikileaks. The court-martial found that Manning made the leaks "with reason to believe such information could be used to the injury of the US or the advantage of any foreign nation". She was subsequently sentenced to 35 years in prison.

The controversial decision remains a subject of heated debate. Manning's supporters lobbied then-US President Barack Obama to commute her sentence via a presidential pardon, which was granted in January 2017. Obama stated that Manning's sentence was "very disproportionate relative to what other leakers have received" and that the seven years she had spent in prison was sufficient punishment for her crimes.

Since her release, Manning has campaigned for left-wing causes such as universal healthcare, open borders, the abolishment of standing armies, among other things. On September 13, she was named a visiting fellow at the Kennedy School's Institute of Politics (IOP). "Broadening the range and depth of opportunity for students to hear from and engage with experts, leaders and policy-shapers is a cornerstone of the Institute of Politics," said IOP director Bill Delahunt.

In response, Morell resigned. The outspoken Morell, who served as deputy CIA director from 2010-2013 and twice as acting director during transitional periods, has been embroiled in his own fair share of controversies.  He has called alleged Russian interference in the presidential election the "political equivalent of 9/11" and called Donald Trump a "gift to Putin." He also defended the CIA use of waterboarding on detainees during the wars in Iraq and Afghanistan, calling such tactics necessary to save American lives.

Perhaps his most controversial statements came in August 2016, where he called for Washington to make Iranian and Russian soldiers in Syria "pay a price" for their involvement in the civil war. He called for the "covert" assassination of Russian and Iranian soldiers, as well as the bombing of Syrian government installations.

Of all the veterans who honorably served…Harvard hires Chelsea Manning who was convicted of espionage. Unbelievable. https://t.co/3jo7vTdKUb

Morell also wrote in his resignation that "CIA Director Mike Pompeo says [Wikileaks] operates like an adversarial foreign intelligence service." This is not entirely correct: Pompeo has in the past called Wikileaks a "non-state hostile intelligence service" in April. As the Wikileaks twitter put it, "whatever that means, not 'foreign'"