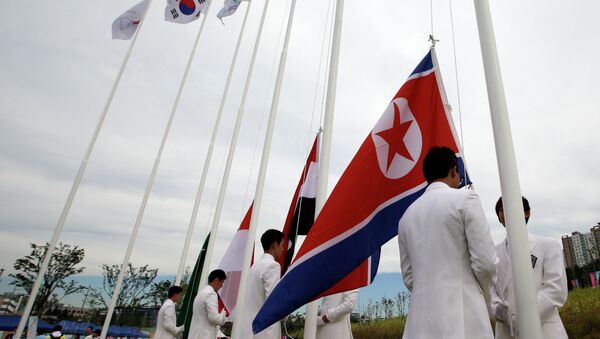 © AP Photo / Lee Jin-man
Subscribe
UN Secretary-General Antonio Guterres said in an interview that he is "very concerned" over the escalation on the Korean Peninsula and would welcome Moscow's role in bringing Pyongyang and Seoul to the negotiating table.

"Anything that can be done to restart meaningful dialogue between the two Koreas is welcome. And if Russia has a possibility to play a role on this, I think this possibility must be encouraged," Guterres said in an interview with RIA Novosti.

The UN chief also said that he is "very concerned" over the North Korean crisis and called for efforts to create conditions for a political solution to the problem.

"There is a hope and I think that it is absolutely essential to avoid things to get out of control." "We must understand that a military solution would be a disaster and we must do everything to create the conditions for a diplomatic initiative and a political solution," he said.

Guterres said he intends to involve his predecessor on the UN chief's post, Ban Ki-moon, in the settlement of the North Korean situation.

Later in the day, Kremlin spokesman Dmitry Peskov commented on the UN chief's proposals on the North Korean settlement.

"It is necessary to find out the details, discuss the details. So far it is impossible to raise the question," Peskov said, answering a question whether Moscow supports the initiative of the UN secretary-general about the possibility of involving Ban Ki-moon in the settlement of the crisis on the Korean Peninsula.

Guterres' statements come several days after the UN Security Council unanimously adopted new sanctions against Pyongyang as a response to North Korea's most powerful nuclear test conducted on September 3. The UN resolution bans Pyongyang from exporting textiles while capping how much crude oil and refined petroleum products can be imported. Natural gas condensates and liquids are also included among the items North Korea is restricted from importing in excess of UN guidelines.

Prior to voting in favor of the UN resolution on North Korea, Russian President Vladimir Putin conducted talks with his South Korean counterpart on the sidelines of the Eastern Economic Forum. Moreover, according to the Russian Foreign Ministry, Moscow "removed all unacceptable points" from the text of the UNSC resolution.

Russia has repeatedly called for re-launching talks between Pyongyang and Seoul and also proposed a joint plan with China aiming to settle the situation on the Korean Peninsula, urging North Korea to stop conducting nuclear tests, calling on the US and South Korea to refrain from joint drills.