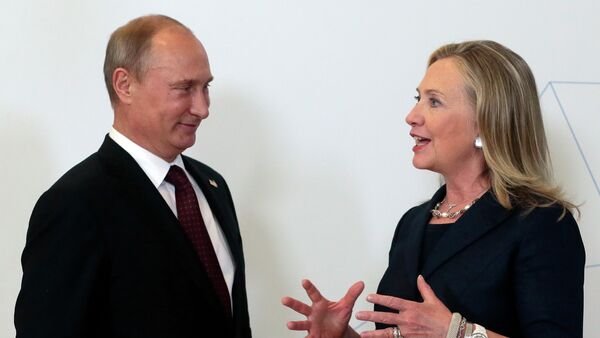 © AP Photo / Mikhail Metzel, Pool
Subscribe
International
India
Africa
In her newly released book "What Happened" Hillary Clinton claimed that the Russian president had a "personal vendetta" against her. The Kremlin has commented on the allegations.

SOCHI (Sputnik) — Kremlin spokesman Dmity Peskov has denied the former US presidential candidate, Hillary Clinton's claims that Russian President Vladimir Putin had a "personal vendetta" against her, which she mentions in her latest memoir "What Happened."

"No," Peskov said, responding to a journalist's question whether Clinton's claim is true.

Putin does not plan to read the book, Peskov added.

In her new book, Clinton focused on the reasons that led to her defeat in the 2016 campaign, which ended with the Democratic party nominee losing the election to Donald Trump, who obtained 304 electoral votes to Clinton’s 227 electoral votes.

'What Happened': Story Worth Reading or Hillary Clinton's 'Enemy List'?
"Now free from the constraints of running, Hillary takes you inside the intense personal experience of becoming the first woman nominated for president by a major party in an election marked by rage, sexism, exhilarating highs and infuriating lows, stranger-than-fiction twists, Russian interference, and an opponent who broke all the rules. This is her most personal memoir yet," Clinton's publisher Simon and Schuster said in a statement describing the book.

In "What Happened," Clinton has once again claimed that Russia and so-called "Russian hackers" are to blame for her defeat in the US election. Moscow had repeatedly denied the claims of Russia's alleged interference in the US election, calling them "absurd" and aimed at distracting public attention from pressing domestic issues.

Apart from the blame-game against the Kremlin, in her book, the former Democratic presidentil nominee accused former FBI Director James Comey and Bernie Sanders of having an impact on her loss in the presidential race. When Bernie Sanders was asked to comment on Clinton's claim that his attacks during debates "paved the way" for Trump, the independent US senator said on "The Late Show" that the Democratic presidential candidate should "move forward."

Clinton's book has also prompted controversy in the US media and among Internet users even before it was published.

Hillary Clinton I won't spend a broken penny on your book but did you ever blame yourself 4 #WhatHappened? Ma'am you were TRUMPED! pic.twitter.com/V9Icn6ou0Q