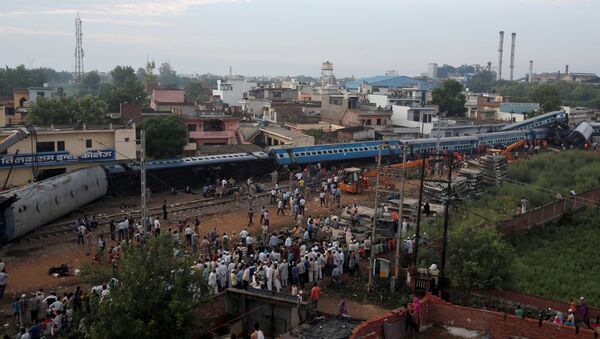 © REUTERS / Adnan Abidi
Subscribe
India has had four train derailment accidents in the last few weeks. One of the accidents, in Uttar Pradesh on August 19, killed 23 people and injured more than 150 people. This series of serious accidents led to the resignations of Minister of Railways Suresh Prabhu and Chairman of the Railway Board A.K. Mittal.

India was one of the first countries in the world to build a large railway system. Its 21-mile railway from Mumbai to Tana was built in 1853, under British colonial rule. At the time of independence in 1947, the Indian railway network covered more than 5,000 kilometers, behind only the US, the former Soviet Union and Canada. The surge in India's population and its rapid urbanization meant that the trains, which were relatively affordable, became the most important means of transport for most Indian people. But the explosion in passenger numbers severely burdened the aging railway system, which had been constructed to a fairly low standard. As a result, accidents have not been uncommon.

The system is controlled by the Ministry of Railways through the state-owned Indian Railways, which has more than 1.5 million employees and is India's largest state-owned enterprise. It is also probably the most inefficient company in the state sector. Coupled with the Indian government's policy of low-cost train transport and high salaries for railway employees, the Indian railway sector simply cannot accumulate enough funds to update the railway system.

The Indian government is not paying enough attention to vital infrastructure like railways. Instead it is spending billions of dollars a year on weapons. At the same time, India's domestic manufacturing industry has fallen behind, unable to provide technical and equipment support for railway upgrading.

It could be said that India's train accidents are not even accidents, but high-probability events caused by systemic problems. For decades, the situation has not improved. According to the statistics, in 2016 more than 500 train accidents took place in India. This problem cannot be solved by the resignation of the minister of railways.

The slow speed and frequent accidents on India's railways have become symbolic of the backwardness of the country's infrastructure. In the international media coverage of India, the train-related problems also give a negative impression of the country to the international community. Not only do foreign tourists feel insecure about traveling there, but foreign investors also have little confidence in India's infrastructure, which has hindered the development of India's economy and modernization.

Over the past decade, the Indian government has recognized the importance of railways for economic development and it has proposed a series of railway construction plans. After Modi came to power, he expressed ambitions not only to reconstruct the original railways but also to form a "diamond quadrilateral" of railways connecting Delhi, Mumbai, Chennai and Calcutta, the Delhi-Chennai high-speed railway corridor and the Mysore-Bangalore Chennai high-speed rail lines. At the same time, India also become more welcoming to the participation of foreign funds and enterprises. In September 2014, when Chinese leaders visited India, the two countries signed an agreement to invite Chinese enterprises to participate in a project to upgrade the railway from Bangalore to Mysore. India also announced in 2015 that it would invest more than $13 billion over five years to modernize and expand the railway system. In February 2016, India and Japan signed a $12 billion agreement to build a high-speed railway from Mumbai to Ahmedabad.

The Modi government's railway construction plan is exciting, but will not be easy to achieve. First, the huge funds required have not yet been mobilized, partly because private capital hasn't been properly involved, but also because there are still concerns regarding foreign investment. Second, long-term constraints in the institutional infrastructure in India have not been resolved, such as problems related to land expropriation.

Even if Modi can create a miracle and successfully complete his plan, it only involves the enhancement of the main Indian railways, which account for just a small part of the entire Indian railway system. A comprehensive upgrade of the whole system will need a huge amount of money, and will take several decades to achieve. Therefore, news about Indian train accidents is not likely to fade away.

000000
Popular comments
michael, A nice wisch but..... My opinion fresh water and toilets and proper crematorium and schools should be the first matter. But the government don't care et all for the poor people !! Only for the Army and the Ritsch
tobi.gelando
14 September 2017, 12:46 GMT2
000000
interesting article. There's a lot of history in the Indian rail system and yes it is a shame that it hasn't been kept up to date. But, with such a large population, the need for so many other aspects of infrastructure to be addressed and upgraded, the railways get lost in the crowd. I for one hope that the government will now turn to modernising and making the system safe for all.
michael
14 September 2017, 02:02 GMT1
000000
Newsfeed
0
New firstOld first
loader
LIVE
Заголовок открываемого материала
Access to the chat has been blocked for violating the rules . You will be able to participate again through:∞. If you do not agree with the blocking, please use the feedback form
The discussion is closed. You can participate in the discussion within 24 hours after the publication of the article.
To participate in the discussion
log in or register
loader
Chats
Заголовок открываемого материала
Worldwide
InternationalEnglishEnglishMundoEspañolSpanish
Europe
DeutschlandDeutschGermanFranceFrançaisFrenchΕλλάδαΕλληνικάGreekItaliaItalianoItalianČeská republikaČeštinaCzechPolskaPolskiPolishСрбиjаСрпскиSerbianLatvijaLatviešuLatvianLietuvaLietuviųLithuanianMoldovaMoldoveneascăMoldavianБеларусьБеларускiBelarusian
Transcaucasia
ԱրմենիաՀայերենArmenianАҧсныАҧсышәалаAbkhazХуссар ИрыстонИронауОssetianსაქართველოქართულიGeorgianAzərbaycanАzərbaycancaAzerbaijani
Middle East
Sputnik عربيArabicArabicTürkiyeTürkçeTurkishSputnik ایرانPersianPersianSputnik افغانستانDariDari
Central Asia
ҚазақстанҚазақ тіліKazakhКыргызстанКыргызчаKyrgyzOʻzbekistonЎзбекчаUzbekТоҷикистонТоҷикӣTajik
East & Southeast Asia
Việt NamTiếng ViệtVietnamese日本日本語Japanese俄罗斯卫星通讯社中文（简体）Chinese (simplified)俄罗斯卫星通讯社中文（繁体）Chinese (traditional)
South America
BrasilPortuguêsPortuguese
NewsfeedBreaking
11:58 GMTMacron, Biden to Speak in Coming Days After France Loses Defence Contract With Australia
11:57 GMTMan United Boss Ole Gunnar Solskjaer Hits Back at Rio Ferdinand Over Cristiano Ronaldo Comments
11:51 GMTErdogan Plans to Meet With Greek Prime Minister During Visit to US
11:31 GMT‘Ah Yes, the USAF Su-27 Fleet’: Users ROFL Over Russian Jets in Tweet Marking US Air Force’s B-Day
11:28 GMTNew Blast in Afghanistan's Jalalabad Kills 2
11:27 GMTHealthcare in Lebanon Facing Collapse Amid Fuel Shortages, Brain Drain, WHO Chief Says
11:03 GMTPrince Andrew 'May Visit Pregnant Daughter' at London Hospital Amid Impending Sex Abuse Lawsuit
10:45 GMTLancet Letter Urges 'Objective Debate' on COVID Origins, Says Lab-Related Accident 'Plausible'
10:40 GMTShamima Begum Claims She'll Help Fight Terrorism in UK but Won’t Name Brits Who Joined Daesh: Report
10:21 GMT'Political Tourist': BJP's Bengal Chief Takes a Dig at Party Leader Who Joined Opposition Party
10:21 GMTTrump Slams ‘Dumbo’ Milley Over Secret Convo With PLA, Says ‘Never Even Thought’ to Attack China
09:44 GMTFrance Says Crisis in Relations With US Over AUKUS to Affect New NATO Concept
09:16 GMTIndia's All-Weather Border Outpost Project Fails to Take off as Ministries Spar With Each Other
08:56 GMTCIA Reportedly Warned US Military of Likely Presence of Children Near Afghan Drone Strike Target
08:56 GMTFrance, Russia Agree Modalities of Settling Champagne Import Controversy, Minister Says
08:28 GMTThere's No Unreleased Sex Tape of Kim Kardashian, Lawyers Say on Claims of 'Graphic & Better' Part 2
08:26 GMTMan Attacks Guards Over Refusal of Entry Without Health Pass in France, Reports Say
07:38 GMTAustralia Had 'Grave' Concerns Over French Submarine Capability, Prime Minister Says
07:33 GMTEight Dead, 7 Missing in China After Passenger Ship Capsizes
07:33 GMTBoris Johnson Slammed for 'Casual' Approach to National Security, 'Unclear Prioritisation of Risks'