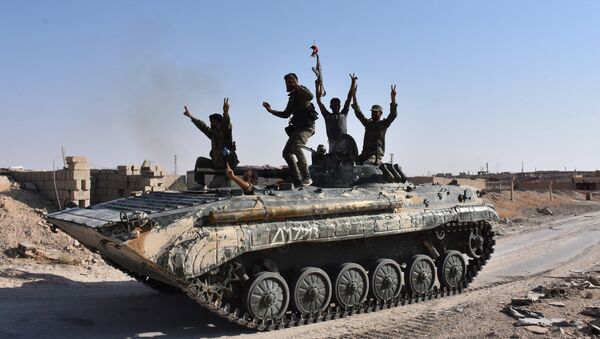 © AFP 2021 / George OURFALIAN
Subscribe
The United Nations chief has commented on the liberation of Deir ez-Zor by the Syrian army with Russia's aerial assistance.

UNITED NATIONS (Sputnik) — The liberation of Syria's Deir ez-Zor is important, but terrorism will not be eliminated in Syria by these operations alone, UN Secretary-General Antonio Guterres said in an interview with RIA Novosti.

Last week marked the lifting of the three-year Daesh siege of the city of Deir ez-Zor and the liberation of a local airfield, which had kept more than 1,000 Syrian troops locked in since January. However, the fighting to fully liberate the area is still underway.

Syria’s Deir ez-Zor Forerunner of Victory Over Daesh
The successful Deir ez-Zor operation was the biggest breakthrough against Daesh since the terrorist group first launched an offensive in the province. The terrorists had been blockading Deir ez-Zor since 2014, with food and other supplies only being airlifted into the city. The group also took control over a large swath of the province of Deir ez-Zor and cut off roads to government-held districts.

However, the operation to fully liberate the city of Deir ez-Zor and surrounding area from Daesh terrorists conducted by the Syrian army with the assistance of Russian warplanes is still underway.