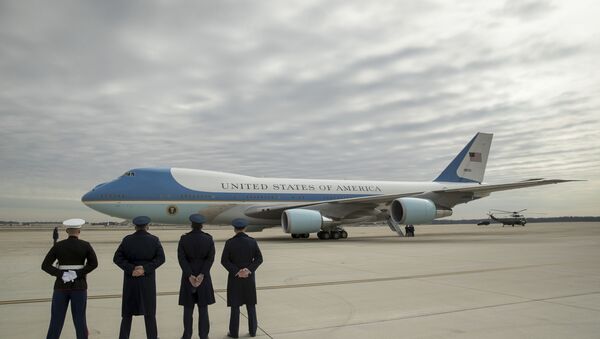 Two Boeing 747-8 commercial jetliners once owned by defunct Russian airline Transaero will receive hundreds of millions of dollars worth of design upgrades before eventually becoming the US president’s personal ride, Air Force One.

Transaero ordered the aircraft from Boeing in 2013 but ended up going under two years later.

On August 1, Sputnik reported the US Air Force was on track to purchase the pair of jets for a nearly 50 percent discount as President Donald Trump seeks to trim costs for Air Force One.

"Boeing is building a brand new 747 Air Force One for future presidents, but costs are out of control, more than $4 billion," Trump said via Twitter on December 6 during the lame duck period. "Cancel order!" he added, though he had not yet had the authority to issue such an order until January 20.

"The plane is totally out of control, it’s going to be over $4 billion," Trump said in December. "I think it’s ridiculous," he said.

The design deal worth $600 million and awarded to Boeing stipulates the defense and aerospace giant will modify the planes’ communications systems, electrical circuits, install a medical facility, create an executive suite, and add defense and autonomous ground operations capabilities, the service said in a statement.

"Following the award of the contract to purchase two commercial 747-8 aircraft, this contract award is committed to working with Boeing to ensure the [Presidential Airlift Recapitalization] program meets the presidential airlift mission requirements," Maj. Gen. Duke Richardson said in a September 13 statement, "as well as the president’s affordability expectations."

Air Force One’s fuselage can withstand a nuclear blast occurring on terra firma while at cruising altitude and features flares hidden in its wings to keep enemies guessing about its location, Business Insider reported in January. "Beautiful. Great plane," Trump said following his first flight on Air Force One, the outlet said.

According to the White House, it is common to refer to the two huge 747s designed for the president’s unique needs as Air Force One, but technically ‘Air Force One’ “can describe any Air Force aircraft carrying the President.”