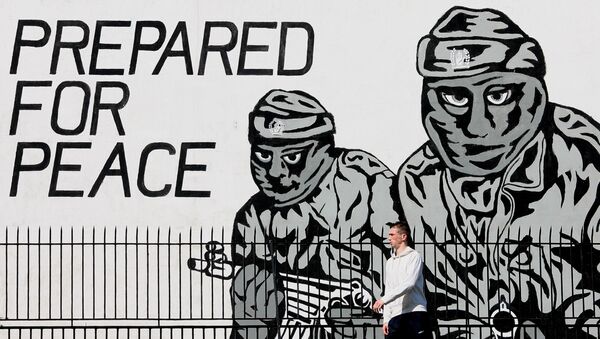 The Red Hand Commandos, a Northern Irish loyalist paramilitary group, has formally submitted an application to be legally recognized, in what could be the first of a series of requests to allow former terrorist groups to operate openly.

Members of the Red Hand Commandos (RHC) traveled from Belfast to London September 6 to submit a formal application to be removed from the list of proscribed terrorist organizations outlawed in the UK.

The first unionist political response to the Red Hand Commando application to be deproscribed. https://t.co/v6CnkbgYt5

​In a statement issued to local media, RHC echoed the words of former Ulster Volunteer Force leader Gusty Spence in offering "true and abject remorse to all the innocent victims of the conflict."

"In closing we would encourage all those working within loyalist areas to continue their sterling efforts in helping to maintain peaceful resolutions to many of the serious issues which continue to blight our community against a backdrop of those mindless few who refuse to recognise the on-going positive framework within loyalism. The Peace is harder to win than the War," the group wrote.

​The application has been made under Section 4 of the Terrorism Act 2000, which allows for members of a banned group to contact the government to request deproscription without facing the threat of being charged with membership. The initiative is supported by the Loyalist Communities Council (LCC), an umbrella organisation set up by ex-Prime Minister Tony Blair's former Chief of Staff Jonathan Powell to steer paramilitaries away from criminality.

The LCC argues in retaining paramilitary names, rather than disbanding, it would be harder for dissidents to seek to revive the group at a future point.

​If RHC's application is rejected by UK Home Secretary Amber Rudd, they will challenge it in the High Court via judicial review. The group also made clear that if legalized, they would not use their newfound legitimate platform to glorify Troubles atrocities, instead viewing deprosciption as allowing them to move away from what happened, and instead actively and openly working to support loyalist communities in areas such as education and mental health.

Estimates of the group's current membership numbers are unavailable as yet, but it is predominantly based in the east of Northern Ireland. 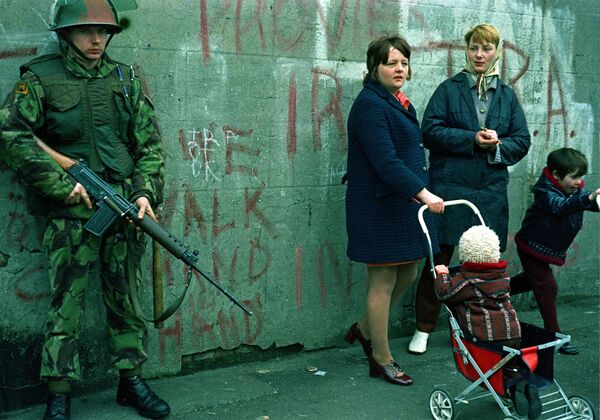 Women and children stand near an armed British military soldier patrols a street in Belfast, Northern Ireland, Feb. 1972. British paratroopers shot 13 demonstrators during a civil rights march on Jan. 30, known as Bloody Sunday.
© AP Photo / Michel Laurent
RHC, a comparatively small loyalist paramilitary group long-aligned with the larger UVF, was established early in the Troubles and outlawed in 1973. The group is accused of many murders, predominantly of Catholic civilians, and even Protestants it mistook for Catholics, with the last slaying attributed to the group being one of its own members in 2003. The group nonetheless claims it has not been involved in any terrorist or criminal activity for over a decade.

In its statement, RHC implicitly defend their role in the Troubles, and go as far as to suggest they played a role in securing the "constitutional position" of Northern Ireland within the United Kingdom.

Say Hello to My Little Friends: UK to Have Weak Government 'Whatever Happens'

RHC's seemingly sudden application could have been motivated by the effective entrance of the Democratic Unionist Party into the UK government —  the party, Northern Ireland's largest, will support Theresa May's minority Conservative administration in crucial votes.

Established by Ian Paisley in 1971 due to disagreements with the leadership of the Ulster Unionist Party, the DUP quickly established a reputation for having strong links with local Loyalist paramilitary groups.

​The Conservatives' deal with the DUP provoked much criticism — but RHC may have other reasons for believing the UK would accept their application.

Despite the designation of such groups as "terrorist" by the British state, and membership of them being by definition a crime in itself, there is strong evidence to suggest UK security forces (including the army, MI5 and Royal Ulster Constabulary) colluded with loyalist paramilitary groups in Northern Ireland on a huge scale during the Troubles, leading directly to the deaths of hundreds of people in the process.

British forces maintained a network of thousands of agents and informants inside such groups during the period, with many of the individuals involved implicated in criminality and murder. For instance, Amnesty International notes just one agent, Brian Nelson, provided assassination targets for the three main Loyalist paramilitary groups — the Ulster Freedom Fighters, the Ulster Volunteer Force and RHC — as well as providing weapons for the killings. Nelson was involved in importing hundreds of AK47s, grenades and rocket launchers from South Africa in 1988, with the weapons channelled to the illegal groups.

"The breadth and depth of collusion alleged here is truly disturbing. Killing people targeted by the state, using intelligence provided by the state and shooting them with guns provided by the state — if all this is proven, we're not talking about a security policy we're talking about a murder policy. There must now be a full, independent investigation into the scale of the policy where the police, army and MI5 worked with illegal paramilitary groups," said Amnesty International's Northern Ireland Program Director Patrick Corrigan.