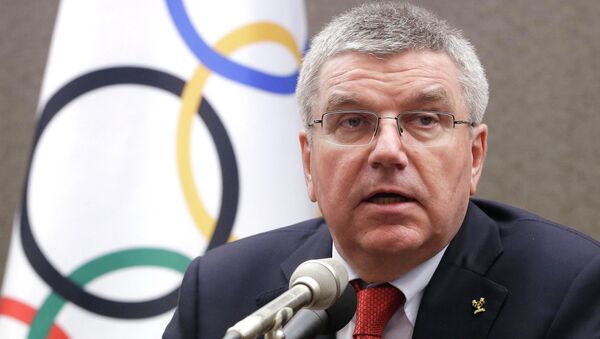 The head of the International Olympic Committee (IOC) expresses hope that Oswald commission will come up with results on doping probes of Russian athletes from Olympics 2014 before the start of the winter season.

MOSCOW (Sputnik) — Thomas Bach, the president of the International Olympic Committee (IOC), expressed hope that the commission chaired by Denis Oswald, tasked with re-verifying doping probes of Russian athletes from 2014 Olympic Games in Sochi, would report on its findings before the start of the winter season.

"I hope that they [Oswald commission] can produce some results before the winter World Cup season starts," Bach said Monday at a press conference in Lima.

The IOC head also said that it was time to make some decision on the six Russian skiers suspended over doping abuse.

In December, the International Ski Federation provisionally suspended six cross country skiers from Russia, based on the findings of the second part of the report on alleged Russian doping abuse in 30 sporting disciplines by the World Anti-Doping Agency's (WADA) independent commission headed by Richard McLaren. Russian Minister of Sport Pavel Kolobkov protested against the decision in January, pointing out that the skiers were spending almost all ski season abroad and submitting doping probes there.

Los Angeles Meets All Requirements to Host 2028 Olympics - IOC
The skiers appealed the suspension in the Court of Arbitration for Sport, which backed the suspension supposed to last until October 31, 2017.