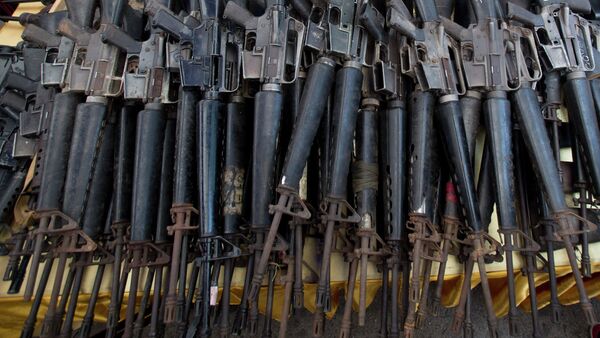 Over the past 65 years, Heckler & Koch has been selling arms and licenses for the production of its guns to Saudi Arabia, Israel, Egypt, the United Arab Emirates, Pakistan, Turkey, Malaysia, Indonesia Myanmar and many African countries.

“Heckler & Koch has been exporting arms since 1955 to nearly every crisis or war area worldwide. Nearly 2 million people are killed and more than 5 million injured by H&K weapons around the world, and one person gets killed by Heckler & Koch bullet every 13 minutes,” Jurgen Grasslin said.

When asked about the possible reason for the company’s surprise decision, he said that H&K has been under strong pressure from the peace movement in Germany its image has been “so terrible,” and that it was probably with these things in mind that the company finally decided to stop selling arms to problem countries.

No Deal? Germany May Cancel Arms Sales to Saudi Arabia
He added that it was not so much pressure from the German government than public pressure from journalists and anti-arms-trade campaigners that eventually forced H&K to change its strategy.

Speaking about the chances of other arms manufacturers following H&K’s lead and adopting similar ethical standards, Jurgen Grasslin said that he hoped that they too will change their practice of supplying arms to crisis zones and problem countries.

“I hope that ethical standards are now [prevailing] at every company that produces and exports arms,” he noted.

“We need a global network of activists, journalists, filmmakers, social movements, physicians, etc., to monitor the arms dealers, politicians, lobbyists and bankers who support arms exports to reduce and finally stop weapons exports all around the world,” Grasslin emphasized.

Germany Red in the Face Over Dubious Arms Sales to Saber-Rattling Qatar
“The best way to deal with this is not to deliver weapons at all, to stop weapons exports because weapons always wander all around,” Jurgen Grasslin said.

Guns produced by Heckler & Koch are estimated to have killed more than 2 million people since the company was founded in 1949. The company’s management has promised to consider compensating the victims of its guns.