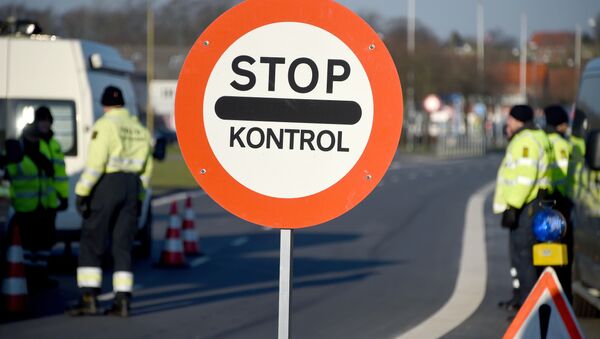 © AFP 2022 / Carsten Rehder/dpa
Subscribe
Plagued with rising crime and gang violence, and concerned about the threat of terrorism, Denmark has decided to employ its armed forces as border controls and guarding duties in order to release more police officers for other work.

Danish police are very busy keeping abreast of crime-fighting and counter-terrorism. Therefore, Danish soldiers will now be called upon to help the police with border control, Danish Radio reported.

Since the re-introduction of border controls in early 2016, the Danish police have used 755,000 hours or 525 man-years on border controls. The soldiers' assistance will hopefully release 128 man-years, which will allow policemen to return to their respective districts and go back to police work, Justice Minister Søren Pape Poulsen and Defense Minister Claus Hjort Frederiksen said at a press conference.

"It's no secret that these are challenging times for the Danish police. Gang conflicts, border actions and terrorist threats are demanding on the police force. That is why we have decided that the defense must relieve the police at the border and in guarding tasks in such a way that allows us to release significant police resources," Justice Minister Søren Pape Poulsen told Danish Radio.

Sweden Besieged by Cuban Trafficking Victims, Displeased Iraqis From Finland
Officers at the Danish-German border in South Jutland will return to their precincts in Western Denmark and help alleviate the workload on the police in that part of Denmark. The officers released from the border guarding mission, will, as a rule be headed to police districts in Zealand, which have been plagued by gang conflicts and violence.

Monday, 160 soldiers have already started a two-week training course. The subsequent plan is to continuously man the border with reinforcements.

Defense Minister Claus Hjort Frederiksen commented on the new plan and expressed his satisfaction with the solution.

Denmark's Police Federation received the news of delegating tasks to soldiers with mixed feelings. On the one hand, the police are under pressure by the ongoing gang wars and border control issues, so that all assistance is welcomed. On the other hand, the very thought of the military solving civilian issues is considered fundamentally "un-Danish."

"First, they said the border controls were only temporary. Then it was repeatedly extended. Then the permanent tents came. And now here comes the military," Erik Boel wrote in his opinion piece in the Danish newspaper Jydske Vestkysten, arguing that a borderless Europe was a crown jewel of the European cooperation accounting for Denmark's prosperity and well-being.

Last week, the EU Commission ruled that the grounds for border controls at Denmark's border with Sweden and Germany no longer existed, calling for the controls to end in November.

However, Denmark's Integration Minister Inger Støjberg stressed the fact that it is up to the Danish government and not the EU Comnmission to decide, signaling no desire to follow the EU's demands.

The border controls were introduced as an immediate consequence of the migrant crisis, when the Nordic countries were flooded by asylum seekers from the Middle East and North Africa.