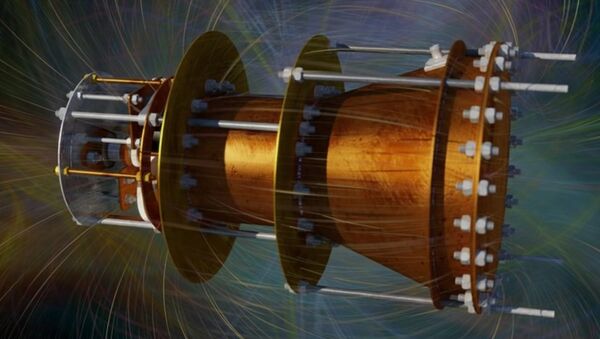 © Photo : Youtube / Area51Canal
Subscribe
Chinese scientists claim they have developed a working model of a microwave engine, which defies the laws of conventional physics, CCTV-2 reported.

The TV channel provided no details of the EmDrive microwave engine, saying only that it would soon be tested in space.

The EmDrive is built around a microwave-generating magnetron and a resonator, which accumulates the energy of their fluctuations. This generates thrust, which can’t be explained by the conventional energy conservation law.

China Claims to Have Built a Working Version of NASA's Impossible EmDrive
The magnetron pushes microwaves into a closed truncated cone, driving them against its short end thus propelling the craft forward without producing any exhaust.

This differs from the type of propulsion currently used by spacecraft, which burn large quantities of fuel to generate a massive amount of energy to rocket the craft into space.

Scientists believe that a rocket propulsion system based on electromagnetic drives engines could enable humans to reach the outer fringes of our solar system in a matter of just a few months.

A report earlier published by NASA specialists said that the EmDrive indeed generates “constant thrust” using neither fuel nor creating any directed radiation pressure – a phenomenon, which experts say flies in the face of the universally —recognized law of conservation of momentum.

Prototype EmDrive Will Crush Everything You Thought You Knew About Space Travel
Electromagnetic drive engines, which require no fuel, could pave the way for manned missions to Mars, Jupiter and its moons, asteroids, and eventually to deep space, which is something that China plans to accomplish in the next few years.

China's State Council has released a white paper about its ambitious space program, including the first soft —landing on the far side of the moon in 2018, and a Mars mission to carry out orbiting and roving exploration before the end of the decade.