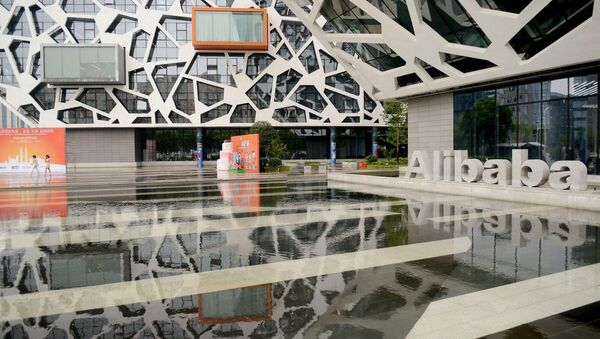 One Deal Impossible to Solve All Problems

However, Mexican scholars who have been studying Sino-Mexico relations for over 20 years argued that it is impossible for one deal to overcome all the problems accumulated in bilateral relations between the two countries.

"China-Mexico relations, in terms of diplomatic relations and trade, have been full of tensions, contradictions and accusations in the last 5-10 years. You cannot overcome the problems generated in the past 5-10 years with one deal. Some people tend to be overenthusiastic [about the Alibaba deal]. I’m very skeptical," Enrique Dussel Peters, the director of Institute for China-Mexico Studies at Universidad Nacional Autónoma de México (UNAM), told Sputnik.

World
Sputnik News Agency, Alibaba Group Sign Memorandum of Strategic Cooperation
The Mexican expert noted that the nation’s exports to China have actually decreased in the last five years and are only a tiny fraction of Mexico's annual exports to the United States.

According to official figures from Mexico’s Ministry of Economy, the nation’s exports to China have fallen for two consecutive years since 2013, before rebounding by 10 percent year-on-year in 2016 to $5.4 billion. But the 2016 exports figure is still 16.3 percent lower than its annual exports to China of $6.47 billion in 2013.

At the same time, official figures showed that Mexico’s exports to the United States stood at $302.6 billion in 2016, accounting for about 80 percent of the nation’s total exports of last year. Mexico recorded a trade surplus of $123 billion against the United States in 2016, while posting a trade deficit of $64.1 billion with China in the same year.

As the deal with Alibaba primarily targets SMEs in Mexico, Dussel Peters believes that local SMEs are unlikely to profit at once, because doing business with China has been proven to be a long-term process that requires a lot of investment and patience.

"I would not start with such a romantic picture of SMEs from Mexico flock to China to do business. If a Mexican firm is currently only selling products from Chapa to Mexico City, I would tell them please do not try to start exporting to China. It’s going to be a very expensive and long-term process, as they have to face different consumers and distributors. Most of the time, SMEs do not have the resources for such a long-term and expensive process," the expert said.

"If Alibaba comes and says we want to order 10 million bananas a week, while SMEs in Mexico tell them I can only offer you 100 bananas a year. There will be no result," he said.

Overly Dependent on the US

Quick TPP Deal Without US Unlikely Over N Korean Crisis, Need for Renegotiation
With the administration of US President Donald Trump repeatedly threatening to terminate the North American Free Trade Agreement (NAFTA), which could disrupt Mexico’s relations with its biggest trade partner, the Mexican government started to look for new options for local companies to help them expand their business into other regions such as Asia or Europe.

But many Mexican companies have grown too complacent when trading with the United States, which could make them less competitive in other markets in the world, experts argued.

The expert suggested Mexican companies have become overly dependent on the United States.

"When someone like Donald Trump comes into office and threatens to back out from NAFTA, they [Mexican companies] just don’t know what to do. They will be desperately looking for new markets," Cisneros Aguilar said.

The Mexican lawyer gave an example that, when Hurricane Harvey disrupted oil production in Texas, Mexico faced serious oil supply problems as it depends heavily on oil refineries in the neighboring US state for oil products.

For Mexican companies to succeed in the Chinese market, they need to change their mindset and try to have a better understanding of China, the expert pointed out.

"Many Mexicans in the political and business circles have an outdated view of China, because a lot of them have rarely visited the country. I was a student in China and I worked there. I started my company also with China in mind. But I belong to a minority, when you consider the whole universe of Mexican business people. That’s why I’m working so hard through my company to change this situation," Cisneros Aguilar said.

Mexico, US Agree to Continue Talks on NAFTA Overhaul – Mexican Foreign Ministry
The expert suggested that Mexican companies need to avoid competing in industries where Chinese companies have an obvious advantage such as manufacturing. Instead, they should focus on exporting agricultural products such as fruits, which China has massive demand for.

"If we see China needs our goods, we need to upgrade our facilities to be able to export sustainably. We can’t tell our Chinese customers that after two months, we run out of products. That’s the reason why Chilean companies or Argentine companies have larger share in the Chinese market than we do. Chile is a smaller country than Mexico, but they export more avocados to China than Mexican companies," Cisneros Aguilar said.

The Shanghai-based expert suggested that food and beverages from Mexico have a good chance in the Chinese market, as other countries in Latin America have already enjoyed success in China with similar products.