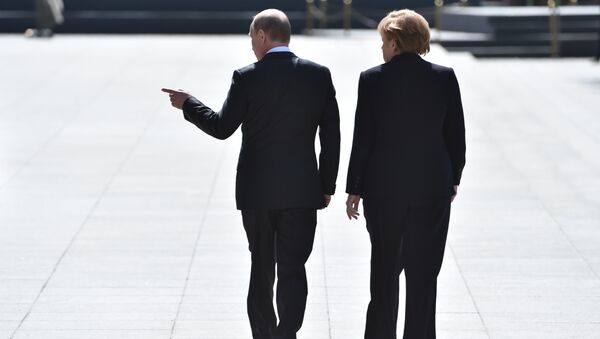 The leaders exchanged views on the current situation on the Korean peninsula, in the context of the DPRK's latest provocation.

"Vladimir Putin and Angela Merkel strongly condemned Pyongyang's disregard of the resolutions of the UN Security Council," the statement said.

US Comes to Russia With 'Absurd' Request for More Sanctions Against North Korea
The Russian President and the German Chancellor said that the actions of North Korea contradict the principles of non-proliferation, and threaten regional peace and security, the Kremlin statement said. Putin and Merkel has also reaffirmed that the Korean peninsula crisis can only be resolved through negotiation.

"The sides reaffirmed that the settlement of this acute crisis is possible solely by political and diplomatic means, by resuming negotiations between all involved parties. They agreed to continue the discussion of the situation at the level of the foreign ministers of the two countries," the statement said.

The two leaders also called for the resumption of talks between all sides involved in the conflict.