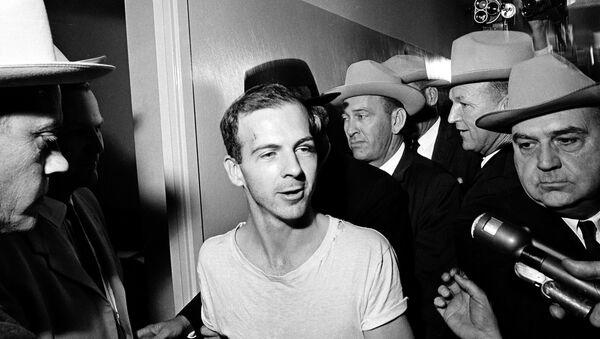 An independent researcher has found a set of CIA files on Lee Harvey Oswald, the alleged assassin of President John F. Kennedy, has gone missing.

By law, all of the US government's files on the assassination of President John F. Kennedy must be released by October 26, 2017. One batch of records won't be among them — namely, a specific set of CIA files on alleged assassin Lee Harvey Oswald.

The records were part of a seven-volume file on Oswald, held by the Agency's Office of Security — a division responsible for protecting CIA property and vetting agency personnel, which maintains a file system independent of the CIA's Central File Registry.

Declassified CIA records show that one set — Volume 5 — is missing. The disappearance, discovered by JFK researcher Malcolm Blunt, is significant — the OS was the first division of the CIA to open a file on Oswald.

The release in July of 3,810 CIA and FBI documents on the assassination by the Assassination Records Review Board threw up a number of revelations that JFK researchers have hungrily devoured and enthusiastically publicized. For instance, the mayor of Dallas at the time of Kennedy's assassination, Earle Cabell, was a CIA asset in the 1950s, and his brother, Charles Cabell, a high-ranking CIA official until 1962.

They also indicate official investigations into the assassination, such as the 1964 Warren Commission, were effectively "controlled' by top CIA officials, including top counter intelligence chief James Jesus Angleton — and interviewed CIA agents deliberately concealed from investigators what top CIA officers, including Angleton, knew about Oswald while JFK was still alive.

Article by Jefferson Morley in AlterNet about the new JFK records and the CIA's stonewalling of Warren Commission: https://t.co/BiMSPfhAJO

​However, evidently what the files did not and will not contain will likely be of far greater interest to conspiracy theorists.

At the very least, the disappearance of part of Oswald's first CIA file is peculiar — if not outright suspicious. The individual — an ex-marine who ostensibly defected to the Soviet Union 1958 — 1960, was of considerable, constant interest to Angleton and CIA staff in the four years prior to November 22 1963.

The opening of Oswald's OS file in December 1959 was a bizarre deviation from standard CIA practice — standard procedure, as set out by agency directives, required agency personnel to open a personality file (a "201 file") on a military defector such as Oswald. Despite this, the CIA's 201 file on Oswald was not opened until a year later, in December 1960.

The CIA didn't share this fact with Warren Commission investigators in 1964, and when the delay was discovered by the House Select Committee on Assassinations in 1978, neither Angleton nor his then-boss, Deputy CIA director Richard Helms, could explain it.

Obfuscation 'For A Reason'

Blunt believes the disappearance of the records amounts to deliberate obfuscation "for a reason" — done due to an internal interest in Oswald's records. Bizarrely, the CIA claim Volume 5 never existed, despite records found by Blunt indicating CIA officials and congressional investigators had access to it.

Such assertions can only add to already sizeable doubts about the official verdict in the landmark case. Both general publics the world over and major international political figures have consistently doubted that Oswald acted alone — in respect of the latter, President Lyndon Johnson, First Lady Jackie Kennedy, Robert Kennedy, French president Charles DeGaulle, and Cuban leader Fidel Castro all concluded  JFK was slain by his political enemies, not a "lone nut" assassin.

Innumerable assassination conspiracy theories have circulated almost ever since the event — most popularly, it is suggested JFK was killed in a plot engineered by CIA agents. Vice President Lyndon B. Johnson, Mossad, the FBI, the Secret Service, the Mafia and Cubans (whether directed by Fidel Castro, or anti-Castro rebel groups) have all been named as potential directors and/or conspirators in the assassination.