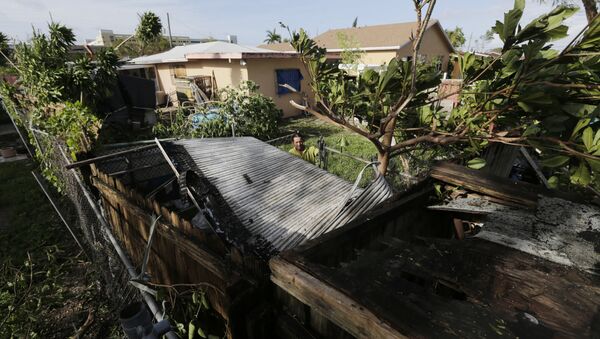 © AP Photo / Jason Dearen
Subscribe
International
India
Africa
Despite being downgraded to a tropical storm Monday, Irma, the once-powerful Category 5 hurricane, isn't finished throwing all it has left at mankind.

Since making landfall in both the Florida Keys and Marco Island, nearly 7 million homes and businesses have been left stranded without electricity as now-Tropical Storm Irma moves through US' Southeast region. However, with more than 6.5 million account holders sitting in the dark, the vast majority of outages are in the Sunshine State, according to Florida Power & Light, Florida's largest electric utility company.

Florida Savages: Boy Greets Hurricane Irma With Sass
FPL's Chief Executive Eric Silagy told the LA Times the storm had caused the most damage the company had ever seen in its history. Irma had affected all 35 counties within the company's territory.

Even though the company has deployed roughly 20,000 workers to help speed up restoration efforts, Silagy says that it will take days, if not weeks, for many residents to get back online.

Following a flyover to examine the destruction Irma left behind in the Florida Keys, Republican Governor Rick Scott said while there is "devastation" in the Keys, Florida's west coast was "not as bad."

Over in Florida's neighboring Peach State, power outages surpassed half a million. Georgia Power, the state's largest utility, reported that by itself it had 389,000 customers without power.

According to Atlanta's Fox 5 station, Georgia has already had one storm-related death.

​But the focus isn't solely on restoring electrical grids: many others are hunkering down for the floodwaters coming in on the back end of Irma's rage. With flood levels going past Hurricane Dora's record of 4.1 feet in 1964, Irma dethroned the record-holder after water reached 5.03 feet in Jacksonville, Florida, the National Weather Service reported Monday.

​With state officials expecting Irma to bring in a storm surge between four to six feet above normal high-tide levels along Jacksonville's St.Johns River, residents are being told to evacuate. Officials told the local Jacksonville Patch outlet the "flooding event" could last more than a week.

Though Georgia is still to get the full brunt of Irma, Atlanta Mayor Kasim Reed told reporters at a briefing crews were already picking up "projectiles" the storm's winds were beginning to toss around.

​"We have already had incidents with panels blowing from buildings that has resulted in several downtown streets being closed down by our public safety personnel already," Reed said Sunday.

​With wind speeds expected to increase to 30 to 40 mph overnight and power outages likely to grow in the city, Reed urged residents to "store trash cans, outside materials and equipment" indoors.

As Irma zeros in on Atlanta, the city faces its first-ever tropical storm warning.

​Set to turn into a tropical depression by Tuesday afternoon, Irma is expected to continue losing force as it moves further inland and approaches the Great Smoky Mountains beyond Atlanta.