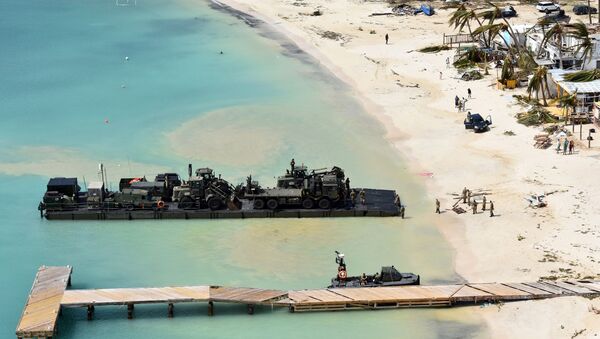 © AP Photo / Royal Navy/Ministry of Defence
Subscribe
Having just survived the awesome devastation caused by deadly Hurricane Irma, it was possibly the last thing the inhabitants on one small Caribbean island expected to endure - fake news.

As residents on Anguilla surveyed the destruction resulting from the 175mph blasts, they must have taken heart from a photograph released on Downing Street's official Twitter feed.

What baffled the locals, however, was the vehicles and aid supplies were actually unable to disembark from the landing raft due to difficulties caused by shifting sands.

Instead the platform had to return to the ship before the relief was eventually transferred painstakingly to the island by helicopter.

Now No.10 has been accused of deliberately misleading the general public by giving the impression it was mounting a swift reaction to help islanders on British Overseas Territory, many of whom are homeless.

Having already been slammed for its 'pathetic' response to the crisis, the government has been now been severely criticized over its attempts to paint a false picture.

Josephine Gumbs-Cooms, a barrister on Anguilla, led the attack, saying:

"It is a message that makes them (the UK government) look good, that gives the impression to the world that we have already been put in a decent position, as though all the major hiccups have been past. That is quite contrary to the facts."

A Ministry of Defense spokesman later confirmed aid was delivered by helicopter, adding that the heavy lift vehicles were not necessary, so they were not landed.

These are the vehicles and equipment that they failed to disembark. Highly misleading!

Conflicting accounts were also given about the power supply on the island that lies in the Eastern Caribbean.

Sir Michael Fallon, the defense secretary, said in a television interview that "Mounts Bay was on Anguilla first and has restored power on Anguilla."

Such information left many islanders distinctly in the dark as they later insisted electricity was still out.

There was further disparity over the impact the British relief team had on the island's hospital. A tweet on the Royal Navy's official account, which was accompanied by photographs of the personnel at work, suggested "Engineers from RFA Mounts Bay repaired the only hospital on Anguilla just in time for an islander to give birth."

Engineers from RFA Mounts Bay repaired the only hospital on Anguilla just in time for an island to give birth #RFAMountsBay #hurricaneirma pic.twitter.com/i2cYBMjAnV

An MoD spokesman said the engineers had fixed a generator allowing medical services to restart. He explained that Mounts Bay and its crew managed to stabilize the situation at the island's ferry terminal which had been destroyed during the hurricane before moving their attention to the British Virgin Islands, which is where the "main effort" was required.

Ms. Gumbs-Cooms disputed this, claiming the scale of the devastation on Anguilla was equally as bad.