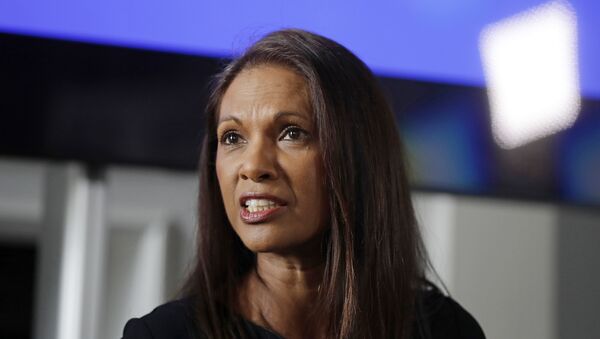 After a successful grassroots campaign by Gina Miller, Westminster will need to approve the release of over US$1 billion in funding for Northern Ireland promised to the Democratic Unionist Party by Theresa May to secure its support after the 2017 general election. Ms. Miller has told Sputnik why she launched the effort, and why it matters.

Due to a legal challenge launched by campaigner Gina Miller, the UK parliament will need to approve the release of US$1.3 billion (£1 billion) in extra funding for Northern Ireland promised to the Democratic Unionist Party by Theresa May in order to secure its support, the government has conceded.

"Having looked at Hansard and newspaper reports, it suddenly dawned on me Theresa May's government were either attempting to use Royal Prerogative powers again, or Henry VIII powers, to ram the payment through without parliamentary debate, approval or authorization, which would be effectively illegal," Ms. Miller told Sputnik.

Democratic Unionist Party Agrees on Principles of Deal to Support Tories
The Conservatives' decision to strike a "confidence and supply" agreement with the socially conservative DUP in order to secure support of its 10 MPs for key votes provoked outrage among many members of the public, and the Conservative party itself.

Moreover, the resilient Ms. Miller believes the payment could contravene the Equality Act — "if you make an additional payment to Northern Ireland, aren't you discriminating against Scotland, England and Wales? After all, they need money too."

Theresa May's Deal With the DUP - Mad, Bad, and Extremely Sad
Miller, who launched a successful campaign in 2016 to block the government from implementing Brexit without parliament's ultimate approval, told Sputnik she was inspired to launch the fresh challenge due to the immense opacity around how the controversial extra payment was agreed.

She was also shocked to find many parliamentarians she contacted simply viewed the payment as a "formality" — there was seemingly little understanding that parliament could, and indeed should, have a say in the matter. As such, a huge number of questions hung over the disbursement — in particular, when it would be paid, and how.

"The payment hasn't been given yet — the DUP say it's being held up due to the lack of a powersharing agreement in Stormont. However, the government is going to need the DUP's support very soon, so at what point will the money be given? Are the DUP taking the government's pledge on faith? None of the timetable makes sense," Ms. Miller enquired.

Ms. Miller's efforts have rapidly produced results — the Treasury solicitor, who heads the Government Legal Department, responded to her enquiries by confirming the payment will have "appropriate parliamentary authorization," via "long-established procedures," under which the UK central government can request the granting of funds from the House of Commons." However, the solicitor conceded no timetable had been set for the making of the payment.

Supreme Court Brexit Appeal - 'Phony, Theatrical War': Gina Miller Exclusive
Dr. Jason Moyer-Lee, General Secretary of the Independent Workers Union of Great Britain, which backed Ms. Miller's action, said that many IWGB members' jobs depended on public money, but they were routinely told that there's no money available to improve their pay, holidays and other terms and conditions they demand.

"Yet, when it comes to keeping themselves in power, this government's fiscal discipline quickly dissipates. There's undoubtedly a need for increased social spending throughout the UK but this should be on a basis of fairness; not self-serving party politics," he said.

If and when the payment comes up for debate in parliament, even dedicated backbench Tory rebels are unlikely to vote against a measure necessary for the survival of May's government, but a parliamentary debate about the extra funding would likely be bruising for her administration.

In its response to Miller, the government also rejected the idea the Barnett formula, which determines the knock-on effect for the devolved nations and regions of core government spending in England, should affect the DUP funding.

"The government is not under a legal obligation to allocate funding to the devolved administrations only in accordance with the Barnett formula. The Barnett formula is a non-binding convention and it does not preclude other means of additional funding being made available," the letter said.

Where is the Money Coming From?

Despite the government's pledges, Ms. Miller still fears the "exceptional" payment could be concealed in a single line in the budget, to be waved through among the rest of the year's finance bill.

"This should be debated, and shouldn't just go through with a nod. We must know where this money is coming from. The government is clearly happy to sidestep parliament to stay in power and get its own may, but their actions must be questioned," she explained.

Separately, the DUP deal is being challenged in a crowdfunded legal case by Green party activist Ciaran McClean, on the basis the agreement allegedly breaches the promised impartiality of the Good Friday Agreement and the Bribery Act.