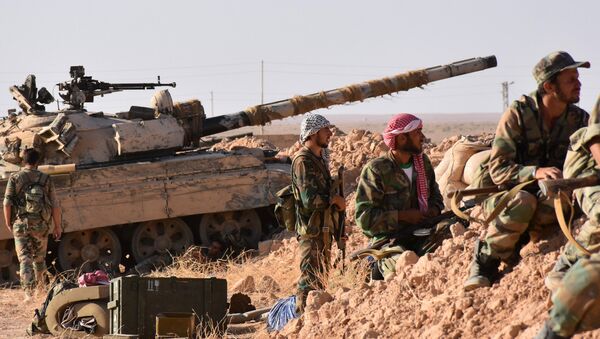 The liberated village is considered to be one of the most important strategic settlements in the area as it essentially serves as the gateway to the main access road leading to the city of Deir ez-Zor.

A Syrian military source told Sputnik Arabic that "infantry units have been working in that direction for a while now in order to open access to the city from the south."

"They’re being supported by artillery and airstrikes. After our recent success in breaking the blockade from the other side, it is time to capitalize on this success and move to lift the siege on the city from multiple directions," he explained.

The source also added that the Syrian army was able to secure the most important strategic locations within the village.

"We’ve managed to secure the village in no small part due to capturing the elevated positions surrounding Kabajib. The terrorists have fled, and our sappers have already swept the village for the booby-traps they left behind," the source said.

The Deir ez-Zor offensive, launched by the Syrian military aided by the Russian Aerospace Forces’ aircraft, resulted in probably the biggest defeat for Daesh in the past three years. In one bold and decisive move, the Syrian army managed to smash through the  terrorist forces that were encircling the city and reach the heroic Deir ez-Zor garrison that, against all odds, managed to hold the city against the Daesh onslaught for 3 years.