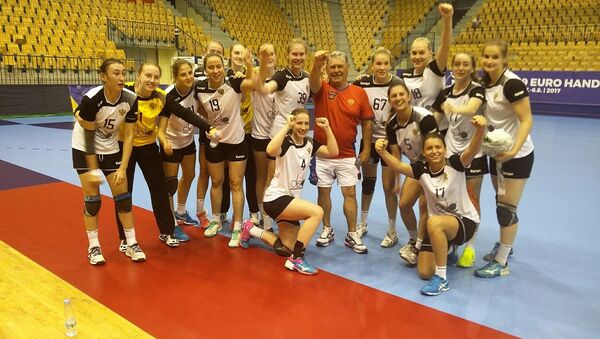 Law enforcement agencies launched an investigation into reports about doping by Russian female handball players after the Handball Federation of Russia (HFR) suggested that the news could be a planned provocation.

MOSCOW (Sputnik) — The fact that doping probes of the athletes, members of the national youth team that won silver at the 2017 European Championship, taken at the time, turned out to be positive, could be the result of a provocation, the HFR said.

The statement comes after the EHF said on Friday that the probes of three Russian players contained banned substances, and all the relevant documents had been transmitted to the EHF Court of Handball. The players were said to have tested positive for meldonium.

"The HRF considers a planned action, or a provocation, as one of the main reasons behind the issue, and it has already addressed the law enforcement agencies that launched a comprehensive investigation," the federation said in a press release.

The HRF also stressed that it was conducting a joint investigation with the European Federation and kept the Russian Ministry of Sport and Deputy Prime Minister Vitaly Mutko updated on the issue.

Isinbayeva to Step Down From RUSADA on May 31 on WADA's Demand – Reports
Russia has been in a center of the doping scandal since 2015, when the World Anti-Doping Agency (WADA) accused the country of multiple anti-doping violations and suspended the Moscow laboratory of RUSADA, the Russian National Anti-Doping Agency.