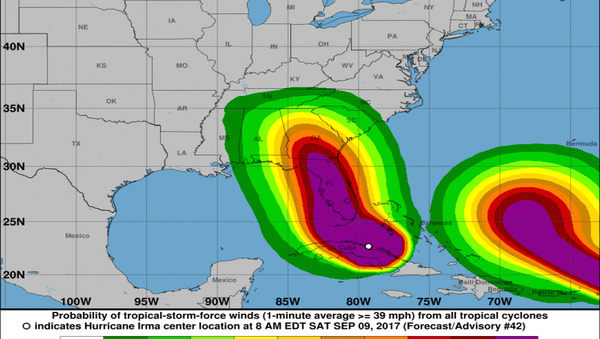 Lines of cars are lengthening along highways after an unprecedented 7 million people were told to evacuate low-lying coastal areas of Florida as deadly Hurricane Irma, forecast to maintain Category 4 strength over the next 24 hours, has already begun to strike the Sunshine State as of Saturday.

Winds of up to 75 mph have been recorded in the southern reaches of the state, and are predicted to approach 125 mph or more on Sunday, according to the National Hurricane Center (NHC), as the large and dangerous storm speeds toward the US mainland.

Islands in the eastern Caribbean already struck by the monster storm, including Barbuda and St. Martin's, have reported widespread destruction and, in some cases, a complete dismantling of all infrastructure, including water, power, telecommunications, hospital services, most buildings and even roadways.

Florida Governor Rick Scott has urged all residents along coastal areas of the state to flee inland or, if possible, get to any of over 300 shelter locations along the projected path of the storm.

Although atmospheric conditions have slightly degraded Hurricane Irma, it remains a large and extremely dangerous weather event, particularly as storm surges along the southern and eastern faces of the state are expected to push water levels between ten and fifteen feet above normal.

On Saturday the NHC tweeted a dire warning:

Irma is expected to intensify as the storm center crosses warm waters prior to striking the southwestern Florida coast.