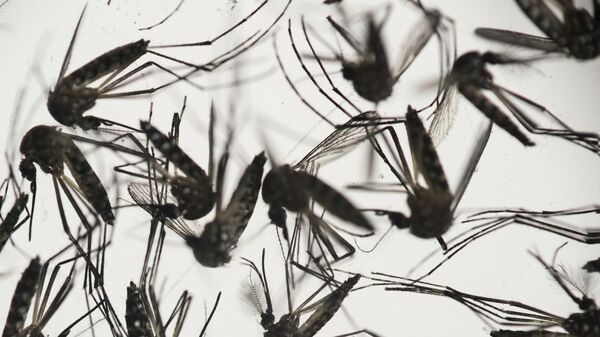 © AP Photo / Felipe Dana
Subscribe
International
India
Africa
Clinical trials into the future use of the deadly Zika virus in the treatment of brain tumors could begin in 18 months, a leading scientist has revealed.

Dr. Milan Chheda believes the mosquito-borne Zika virus could become an unlikely ally in the battle against brain cancer — including glioblastoma.

He is among a group of academics from the United States who have already carried out groundbreaking research into the possibility of developing its potential even further.

New research shows that #Zika virus can be used to kill brain tumor cells most resistant to standard treatment https://t.co/guoPbwBfai

In an interview with Sputnik, the assistant professor of Medicine and Neurology at Washington University, admitted the early signs had already proved encouraging.

"We could bring it to clinical trial for testing in about 18 months, but that's only if everything went perfectly, and everything went as expected. We are understanding more about how the Zika virus targets these cancer stem cells and, hopefully will continue to learn more as we progress," Dr. Milan Chheda told Sputnik.

The scientist was quick to add a word of caution, however, saying:

"The big breakthrough in this field, to put it into context, was just an additional six weeks of extra survival and that's what that temozolomide which is the standard of treatment approved. We hope to do better than that but we are under no illusions that this is going to be cured as mice were still dying from the tumors, we just significantly extended their life."

A study involving medical scientists from St. Louis and San Diego, California, began to test the Zika virus on glioblastoma, the most common kind of brain cancer as well as the most difficult to treat.

Even after surgery and other therapies, it usually kills people — more than 12,000 each year in the United States alone — with a year of diagnosis. Senator John McCain announced in July he had been diagnosed with it.

The team found that exposing samples of human glioblastoma tumors grown in a dish to the Zika virus destroyed the cancer stem cells.

When they tested the virus on ordinary brain cells from adults without cancer, they found that it didn't infect this tissue — which possibly explains why Zika rarely causes problems in adults.

The study, published in The Journal of Experimental Medicine, explained the virus was tested on mice implanted with glioblastomas.

Normally such mice would die within a month, Dr. Chheda, study co-author, told Sputnik, but those injected with Zika lived longer, with four out of nine mice still alive at two months.

"It is unclear at this stage how this would translate to people as the disease affects mice differently to humans. But it is a start and has given us encouragement to consider it as a future treatment alongside radiation and chemotherapy," Dr. Chheda told Sputnik.

"It is so frustrating to treat a patient as aggressively as we know how, only to see his or her tumor recur a few months later. We wondered whether nature could provide a weapon to target the cells most likely responsible for this return," he added.

Although there is still much work to be done, Dr. Chheda voiced his optimism that the "long-standing dream of neuro-oncologists" could now eventually be realized.

Equally, Dr. Michael Diamond, professor of medicine, molecular microbiology, pathology and immunology at St. Louis, said: "We have guarded optimism about this treatment.

"Our study is a first step towards the development of safe and effective strains of Zika virus that could become important tools in neuro-oncology and the treatment of glioblastoma. However, public health concerns will need t be addressed through pre-clinical testing and evaluations of the strains' ability to disseminate or revert to more virulent forms," Dr. Diamond said.

Few will forget the distressing images of babies born with severe brain defects and abnormalities caused during the Zika epidemic in South America.

It proved most dangerous in pregnant women and often resulted in many babies being born with microcephaly — tiny heads. 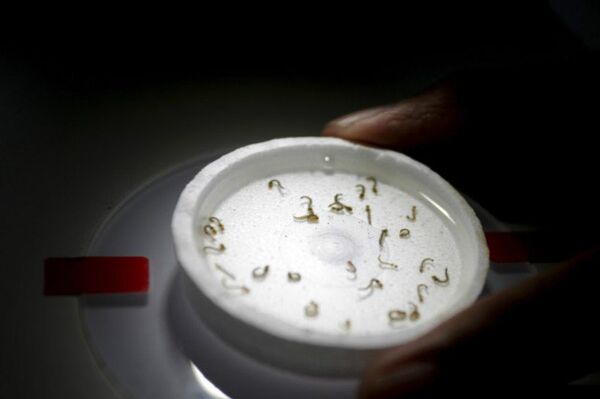 A biologist places a recipient with larvae of aedes aegypti mosquitoes as he conducts a research on preventing the spread of the Zika virus and other mosquito-borne diseases at a control and prevention center in Guadalupe, neighbouring Monterrey, Mexico, March 8, 2016
© REUTERS / Daniel Becerril

Researchers discovered the virus was able to pass from blood into the brain, where it infects and kills stem cells, resulting in severe effects on developing brains.

Recognizing its ability to infect brain stem cells, the academics hypothesized if it could be used to fight deadly brain cancers, many of which are caused  by mutated stem cells.