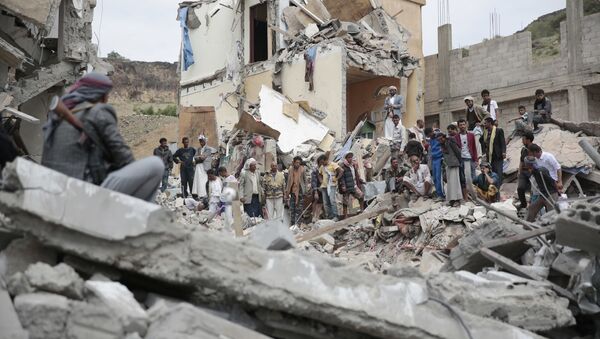 UN World Food Program executive director David Beasley has urged Saudi Arabia to render humanitarian aid to Yemen and end its military campaign there, which began more than two years ago. Will the UN be able to end the Yemen crisis and will Riyadh stick to Beasley's demands?

Journalist Sahir Areibi of the UN headquarters in Geneva told Sputnik that "the UN's call is fair because it is Saudi Arabia which is responsible for the current humanitarian situation in Yemen."

Areibi recalled that "it was Saudi Arabia which unleashed the war against one of the poorest Arab states two and a half years ago."

'Shame the Saudis': 62 Human Rights Groups Demand UN Probe into Yemen War
As a result of the conflict, much of the country's infrastructure has been destroyed, while a multifaceted blockade has been imposed by the Saudis and their allies.

When asked whether Saudi Arabia will adhere to Beasley's call, Aleibi said that "the main problem in this issue is the UN's involvement in the Yemeni war."

"Saudi Arabia is waging war against Yemen without any moral or legal grounds. This war cannot resolve the problems and help stabilization as well as add to democratization," he said, referring to Libya, where "the current situation is much worse than it was before the war," he added.

"The UN has no real power or the will to stop the war or force the aggressors to do so."

"Today the situation repeats itself, except the fact that this time, there are no threats but there is the interest of large states in the continuation of this war and the sale of new shipments of weapons," he pointed out.

Saudi-Led Coalition Denies Allegations of Targeting Civilian Home in Yemen
He noted that no one has conducted any investigation into how weapons are delivered to the Arabian Peninsula, and that no one condemns Riyadh because so many have become complicit in this war by supplying arms Saudi Arabia.

For this reason, Western mainstream media show a biased approach to covering the situation in Yemen, Areibi said, adding that the number of victims and the scale of destruction in Yemen have repeatedly been underestimated.

Western countries act in a way which underscores that their political and economic ties with Saudi Arabia are more important than the suffering of the poor people, according to him.

Amal al-Makhizi, head of the Yemeni center for the protection of human rights, said for her part that "Saudi Arabia should certainly bear responsibility for the situation in Yemen."

"There is destroyed infrastructure and economy, as well as huge number of civilian casualties in Yemen," she said, also pointing to the United Arab Emirates' "direct participation" in the Yemeni war.

The UN has called Yemen the "largest humanitarian crisis in the world".https://t.co/LgQQjDt9Zz

"It's unclear why the UN did not mention the United Arab Emirates, only pointing the finger at Saudi Arabia."

Al-Makhizi expressed her hope that the UN will do its best to force the participants of the aggression against Yemen to stop this war and then pay compensation.

Yemen has been engulfed in a violent conflict between the government headed by President Abd Rabbuh Mansur Hadi and the Houthi Shia movement, also known as Ansar Allah, backed by army units loyal to former President Ali Abdullah Saleh, since 2015.

Iran Support for Efforts to Resolve Yemen Conflict ‘Remain Strong’
According to the report mandated by the UN Human Rights Council, between March 2015, when the UN Human Rights Office began reporting on civilian casualties, and August 30 of this year, more than 5,000 civilians have been killed and more than 8,700 injured. Children accounted for 1,184 of those who were killed and 1,592 of those injured.

Apart from the conflict, the country is suffering from a cholera outbreak, which has by itself killed hundreds of people, with the number of reported cases surpassing 500,000, according to the World Health Organization.