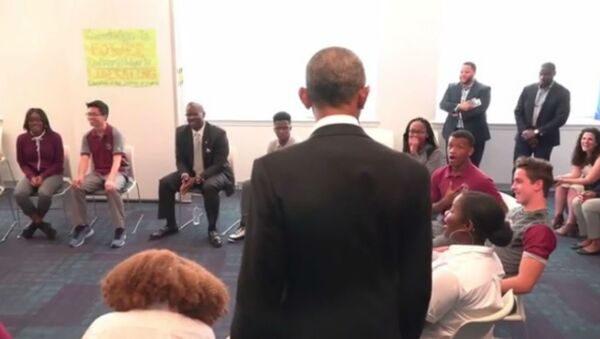 On Friday, former US President Barack Obama made a surprise visit to a science, technology, engineering and mathematics (STEM) school in Washington, DC, to encourage the young students there as they embark on a new school year.

During his unannounced visit to McKinley Technology High School he told a group of students, "I do believe that most of the problems we have are going to be solved by you," in a video posted to Instagram, noting that he often had similar meetings with students both in the US and abroad during his eight-year presidency.

The students gasped in shock as Obama strolled in the classroom with a cheery greeting, "How's it going, everybody?" One young man actually grabs his chest in disbelief and needs a moment to compose himself.


"These young people that I met at McKinley Tech today are the reason I'm hopeful about the future," Obama said of his visit, according to his Instagram account. "To all the young people headed back to school around the country: Make us proud. You're the next generation of leaders, and we need you."

McKinley is is the only STEM school in the DC Public School system.