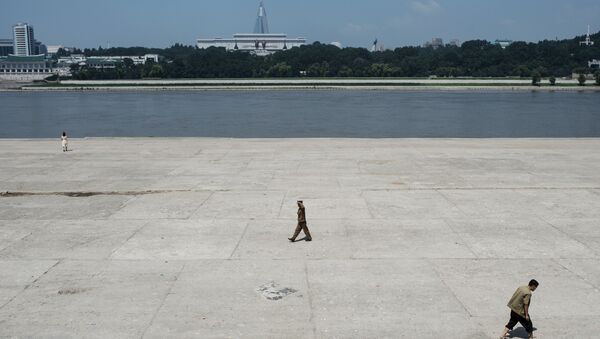 © Sputnik / Iliya Pitalev
/
Go to the mediabank
Subscribe
International
India
Africa
According to the North Korean minister for External Economic Affairs, North Korea supported the idea of cooperation with Russian and South Korea, but the actual time for this hasn't come yet.

VLADIVOSTOK (Sputnik) — North Korea is not against the trilateral economic cooperation with Russia and South Korea, but now the situation is not ripe for that, North Korean Minister for External Economic Affairs Kim Yong Jae told Sputnik on Thursday.

"We are not opposed to the trilateral cooperation [with Russia and South Korea], but this is not an appropriate situation for this to be implemented," Kim said after Putin’s speech at the Eastern Economic Forum (EEF).

Earlier in the day, Russian President Vladimir Putin said that it is necessary to involve North Korea in economic cooperation, and Russia has ideas to offer – "a joint road linking the Trans-Siberian Railway and the Korean railways through North Korea, pipeline transport, development of North Korean ports."

North Korea believes that South Korea and Japan are using the Eastern Economic Forum (EEF) in Vladivostok for their political purposes, and severely condemns it, the minister added.

"We severely condemn attempts by South Korea and Japan to use the EEF for their impure political purposes. Their attacks against self-defensive measures to strengthen the DPRK's nuclear deterrent forces — they are clearly at variance with the purpose and nature of our forum, where economic cooperation between the Russian Far East and Asian countries is discussed," the minister said.

The two-day EEF kicked off Wednesday, drawing over 3,500 participants from more than 50 countries. Several world leaders are attending, including Putin, Moon and Abe. Rossiya Segodnya International Information Agency is a general media partner of the forum.